Two more bases for my Lord of the Rings HoTT army have finally finished drying. These are 28mm GW figures. First u[p is a base of elven heroes. I don't recall who the metal hero is (Elrond?) accompanied by a plastic elven guard. I expect a LotR army will include a large number of high-cost stands so I wanted to have lots of options. 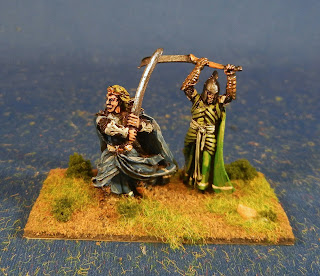 There is also a magician in the form of Gandalf the White. Probably the wrong sculpt for that point in the series (did Gandalf the White have a hat?) but I've painted various Gandalfs so many times over the years that I could not face another set of grey robes. 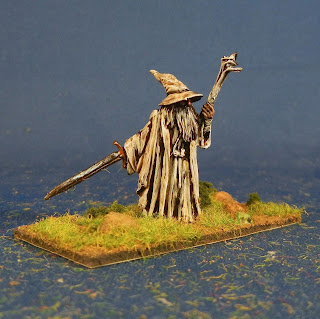 Up next: Some 28mm HoTT at the club tomorrow might, then likely some more 10mm AWI. I assembled a bunch of cannon last night after securing some more glue. If I get time tonight, I will prime these fellows. I also have some more 28mm LotR underway.