I was feeling pretty cocky after my last Maurice victory over Bruce, but apparently he'd been thinking about the game quite a lot and had some new ideas to try out. We played a75-point AWI game with a small, highly trained British army against a large, crappy American army whose general clearly had been into the wine. Bruce created the Americans by building command stands for his new Prussians. 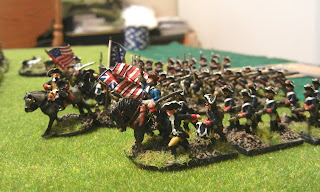 We did terrain placement as per the book and I was the defender. Here, you can see bruce overloading my left with a lot of British foot. He would then rush in with some mounted skirmishers, bag my cannon (%$#*^@^&!) then advance and beat the heck out of me with his grenadiers with deadly fire. 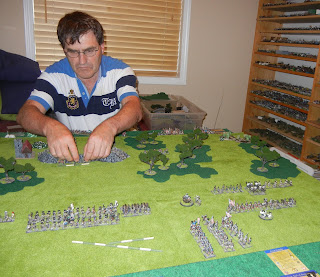 It turned out to be quite the slaughter and we were done in 45 minutes. So we decided to try again. 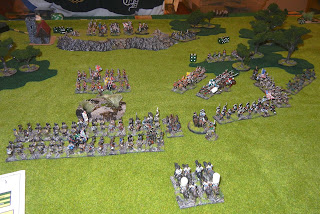 Despite some terrible dice on Bruce's behalf (the roll below happened twice in the game to him), the second game was even worse and I conceded after about an hour. 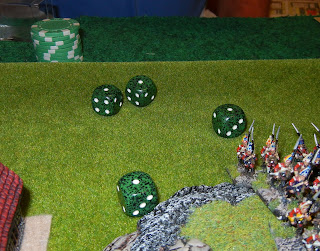 I set up to cover the front but neglected to block a line of advance up the side. He set up, drove his whole force up the open flank (oh %^&#^I*&#%!) and appeared, ready to go as I scrambled to turn my army to face him. He then chewed my units up piece by piece.

I think I will do some more reading in the army building section of the book. Grenadiers with deadly fire meant my guys could neither out shoot nor out melee him. He was careful to protect his flanks so I could never really get an enfilade. Maybe there is a magic missile option in there somewhere? 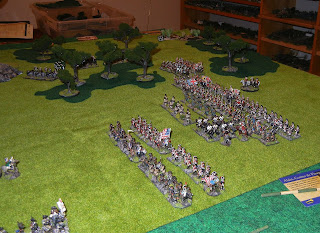 Up next: Some 28mm LotR HoTT units are almost painted. And, if I get some time, I will prep the next batch of 10mm AWI. Lots still to do here--maybe some cannon and more formed troops.
at 6:44 AM

Thanks for sharing. Nice looking battles. Do you see any good tactics for the out-classed Americans?

None I managed to figure out in time! I think ensuring that there is a unit covering every approach so he can't column move onto your flank is a good start! I would also think putting some terrain to cover the defender's flanks would be good. Honestly, with the deadly fire and grenadier advantages, the only play I can see is to get some troops on his flanks and enfilade him--which means leaving the middle of the board open and thinning the American line to allow someone to be able to get to the flank.

When you talk about grenadiers with deadly fire - are you making national advantages specific to some units?

No. Bruce bought deadly fire as an national advantage (so re-roll saved disruptions when causing a hit). Combined with a bunch of grenadiers (they save on a 3-6 and melee as a 7 or 8--can't recall) and you have a really tough bunch of units. Expensive but hard to stop.

I'm confused by your terms, I think. In combat, elite units' base score is 8 + d6. In shooting, they're hit on a 4+, but are only disrupted on a 5+. There aren't any saves of which I'm aware. Lethal Volleys lets you re-roll failed disruptions when shooting. Is this just a language thing, or have you guys house ruled a third step in resolving shooting?

Mostly language. So lethal volleys allows regular infantry (including elite regular units, from what I can tell) to re-roll dice that failed to disrupt. Shooting against my trained (or conscript) troops, that means trading volleys will be awful as I'll be disrupted on a 4+ (or 3+) against his disruption on a 5+.

Elite units also melee with a 8+d6 against my 6 (or 4)+d6 minus any hits I am carrying from his volleying the last turn.

So, basically (and understandably) my rag-tag army has a heck of a time out-shooting or out-meleeing him if he has secured his flanks with the edge of the board or by catching me redeploying.

Yeah, Attacking would be hard - and as you're not using much cavalry, it'd also be hard to out-manoeuvre him. Worse if he hunkers down behind a wall or something. Best bet I can think of is to try to come in on an oblique, maybe set up a 2 on 1 or something.