I drove east for a day of gaming with Tim in Saskatoon. This was a HoTT campaign and I was the centaurs. The poor, hap-less centaurs whose success mostly came from their magician and their shooters. Tim has posted up a report that I won't repeat, other than to note that I won the campaign (unexpectedly and based on game play, not stabbing anyone in the back!). 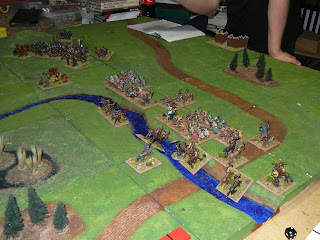 We started out with a quick game of two-on-two to test-drive our armies and give me practice with the river crossing rules (apparently). 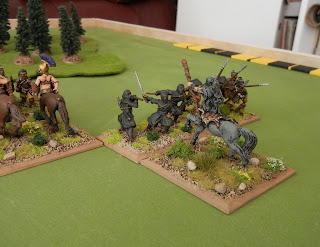 Tim and I played a couple of games of centaur v samurai. He won the first game handily (after I thought I had him in my clutches). But I managed to eek out a win in the second game. Above you can see my magician general fending off his ninja sneakers. 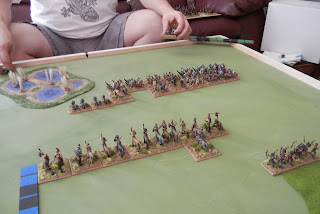 The quickest game I played was against John where I moved, ensorcelled his hero general and we were done. He took this rather better than I might have. I was worried there would be some complaining about gimmicky wins (cause it was...) but everyone was a good sport. 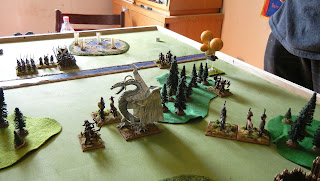 I won and lost a couple of other battles but the two I recall the best were glorious defenses. In one game I had two shooters, two centaurs and a magician. I managed to drive off a dragon, an airboat and bag some riders. Then I took on the main body of the enemy army as well as an allied contingent and managed to push them past their break point. What a defense! 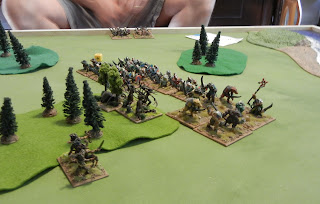 My last game was a defense of my capital against John's endless rat hordes. I had two shooters, two lurkers and two riders. John moved forward in a column, brush up against some forest and out came the lurkers. This jammed up his arm because of ZOCs and then I duked it out with his blade general, using a shooter and a rider to close the door. Another sneaky win for the good guys.

Overall, a great weekend of gaming. I can't wait for the EDBAG HoTT campaign to start this autumn.

Up next: I need to figure out what I want to accomplish this summer on my holidays. completing this 10mm AWI commission is first up. Then maybe a 28mm LotR HoTT army. Then maybe some terrain and 28mm warbands for Songd of Arthur and Merlin?
at 4:02 PM

It was great to have you out, Bob! Those two games you mentioned were certainly nail-biters right to the end! Thanks for the good times!