We had a dozen guys out at the club last night, with three games running. I played in a game of sci-fi FUBAR hosted by Bruce along with Guy, Chen and Stu (below) and Chris, Jonathan and Terry (not shown due to shame at our loss). 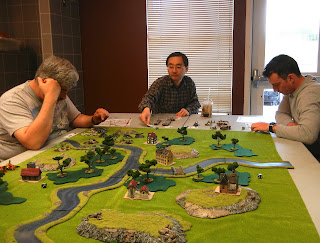 Dave and WIll tried out GW Historical's Waterloo game. It looked pretty but the reviews were mixed. 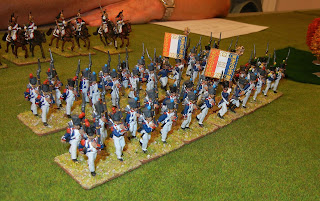 Mark and Scott played a game of Warhamster, where Scott's daemons fought Mark's goblins. I missed the outcome of this game--a lot of time was spent on magic at the beginning and they were moving to contact as I left for the evening. 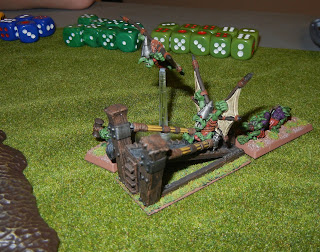 FUBAR started badly for the attackers (see below) as we lost control of the net and then had our command unit rudely destroyed in the opening turns. We never really managed to get going until the defenders had occupied key terrain. 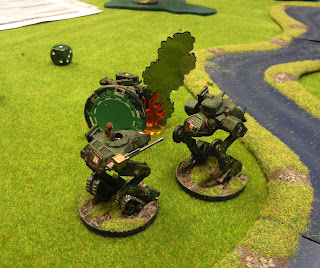 We then took a beating trying to knock out the heavy tanks (this was likely a mistake to focus on them) while the defending infantry occupied the towns (i.e., the victory objectives). For the most part, we never really got out of our set-up area. Had we had the net for even a couple of turns, the game might well have tipped the other way. A good bit of play by the defenders and some bad luck for us. Oh well! 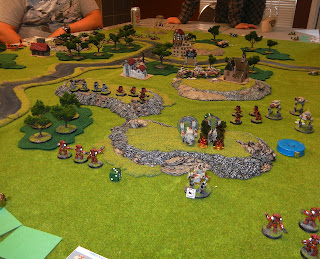 Up next: Some 10mm AWI are creeping through the painting process, with hair, wood and gunmetal left to do. I also picked up some walls to paint. With foul weather expected tonight, I hope to spend some time in front of the painting table.
at 6:21 AM

Bob, do you guys play at a store, and if so, which one?

FMB, Our club has actually rented a room at a community league hall. The only store with enough room for us is inconveniently located given our respective homes so renting was our best option.