We had 13 (I think) guys out at the club last night with four games eventually running. Mark and Scott played some Warhamster (Goblins versus Daemons) while Bill and Jon played a WW2 game. 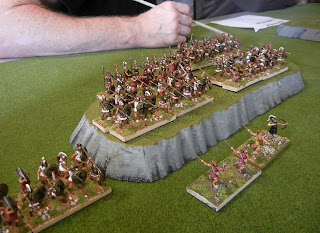 Dave hosted a game of Impetus, with Greeks fighting off some Persians in glorious 1/72-scale. 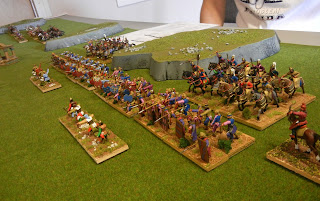 I brought out some 28mm HoTT armies. Bruce played Romans, Andy played Vikings, Chris played Celts and Terry brought his own goblins. We got four games in which was a good number. I think the Romans took two games for the overall best record of the night. 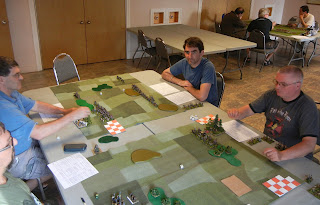 Here you can see the Romans advancing on the vikings, who are holding the hill. The Viking's flyers (three eagles) are sneaking around behind the Romans and made this a very close game by causing Bruce no end of flanking and blocked drive-back problems. But he managed to pull out a win. 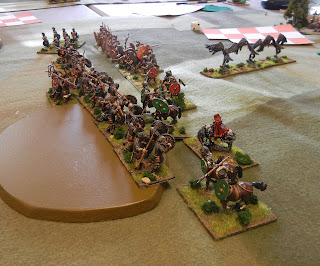 Below you can see the Vikings again lining up, this time against the goblins. Terry's determination to keep his shooters in the wood made like hell for the Vikings, who eventually got picked apart and then rolled up by a troll. 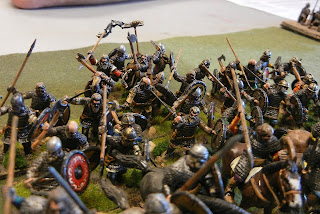 Up next: Some more 10mm AWI are underway (foot plus three batteries of cannon).
at 7:42 AM

Your last picture here is an incredible shot. Well done, you should submit that somewhere for a prize. It really captures the chaos of battle.

Thanks Mark. I actually took it with the intent of giving Andy a hassle about having his viking general leading from the rear.