We had our sixth annual MayDay gaming convention this weekend. Congratulations to organizer Craig who did a great job (again). I played a bit of Blood Bowl in the morning which was a fun introduction to the game. In the afternoon, I played Bruce's DBHx Franco-Prussian war scenario. I spent most of it bashing myself silly against Don Ray's dastardly French forces. Oh, such casualties!

In the early evening, i ran my Basic Impetus version of Freeman's Farm in 6mm. Here is Scott putting the first few Brits on board. The scenario entails map movement (to mirror the historical development of the battle) combined with a variable-speed clock. 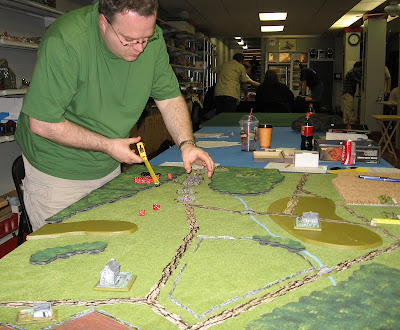 Alas, the clock ran quickly as Terry rolled a 6 on 10 of the 15 turns (AHHHH). This put a lot of pressure on the British who struggled to get on board in time. I'm not sure what to make of this freak occurrence. It was certainly possible within the rules of the game but was very unlikely. Adjusting the clock mechanic would likely unbalance "average" games. Hmmm. 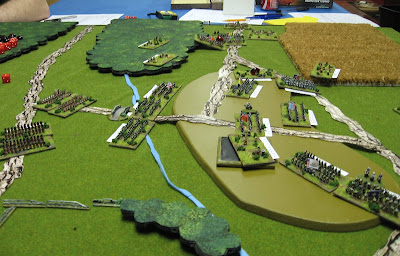 The British came on the east edge of the board, eschewing a more historical deployment. But the time pressure forced their flanking maneuver to show up and enter a kill zone before the Americans has been drawn far enough forward that the flanking maneuver was really on the flank. 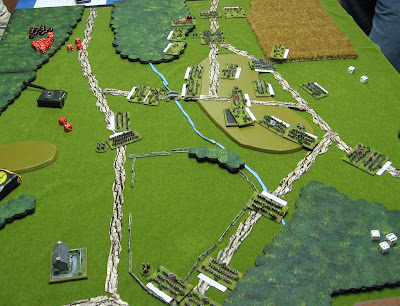 In short, the British could not come to grips with the rebels fast enough and the Americans won by not losing. Thanks to everyone who played--seems like the basic mechanics worked well enough. Glad to get the game out again! 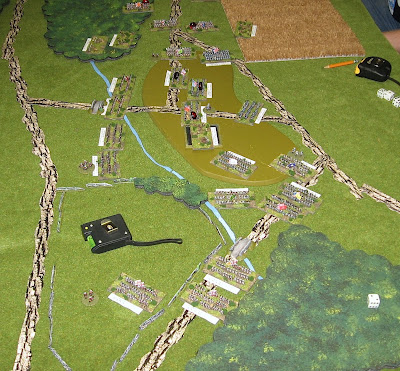 I also caught a bit of Bob's 6mm Zama game (which I would have loved to have played in). 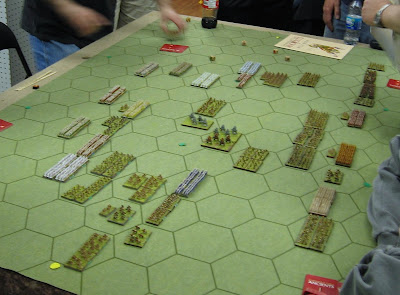