This weekend I finished up a painting commission for another 15mm Carthaginian DBA army. The figures were Corvus Belli.

There are two elements of 1El. These fellows were tricky, with separate ears (!) to glue on. Blue tack, gel crazy glue and a lot of swearing were necessary! But they are finished and, I think, look pretty good. 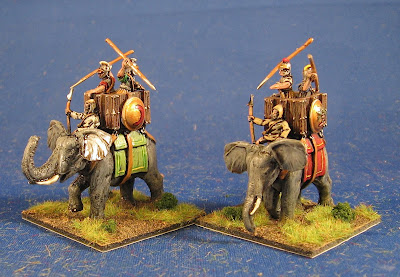 There are two elements of 2LH--Numidian horse with animal print shields. 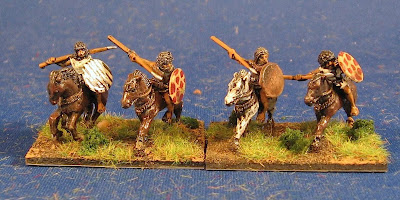 There are two 3Cv elements, including a Cv General with Hannibal in charge. 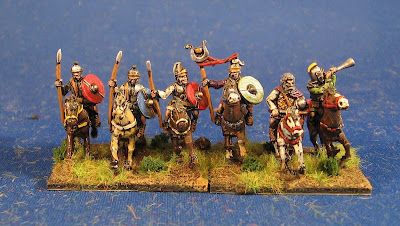 There are also three elements of 4Sp.

And three elements of 3Wb.

There are four bases of 2Ps. I thought these had nice character.

Finally, there was one element of 4Ax. For whatever reason, I based these as two elements of 2Ps (below). I have since soaked them off their base and will be putting them together on the proper base tonight. Duh.

Up next: I have finished painting five bases of 28mm HoTT skeletons. I think I will mount these as blade as they are formed warriors and have some more ragtag skeletons as hordes. After these, I would like to finish the 28mm Legionnaires I need to complete the Marian army.
at 2:44 PM

These look great. I remember well the 'fun' with the elephant ears. I found white glue on one surface and super glue on the other made it easier.

Love the Numidian shields and the warband. Your wash technique works very well for the bare-chested Gauls.

Very good work. The Corvus Belli are great miniature and your painting are very beautiful.

Thanks guys; that is very kind. Yes, nice figures that take paint and the dip pretty well!

Good day Sir,
Splendid !
I am in France, do you still have that army and do you sell it ?
Kind rgrds,
Stephane

Alas, no, these guys were sold a number of years ago. Thanks!