With the weather slightly overcast, gardening is out so I returned to finish some painting. First up were two bases of 28mm Roman triarii (4Sp) so I can morph my Marian Roman DBA army into a Polybian Roman army.

I originally was going to cut the pilum head off, drill out the right hand and then insert a spear head to make the triarii. But then I lost my nerve on the drilling an instead decided to fudge the spears behind the shields. Why they would have drawn swords while still holding huge, unwieldy spears in their shield hand remains a mystery... . 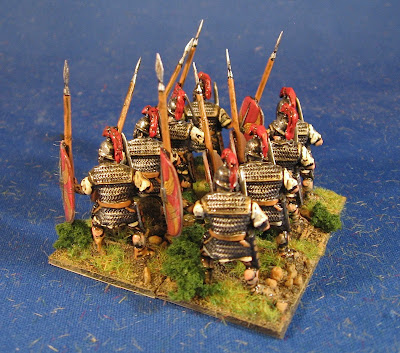 Overall, I'm happy enough with the result. But now back to basic legionnaires for awhile! I need about six more bases of them to finish up the 4Bd requirements. 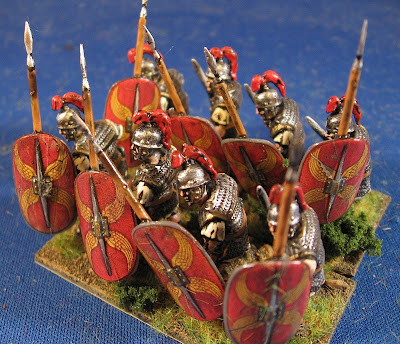 I also knocked off two of the 12 hex-villages I bought. these actually look better in person than they do in these photos. The quality of the sculpts is somewhere between old (bad) JR Miniatures and new (much better) JR Miniatures. The price was right, though. 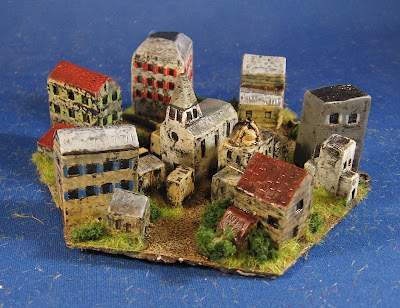 The town is nice. 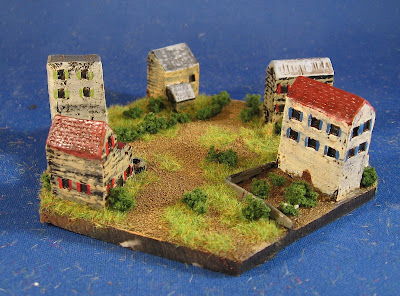 I prefer the village. I'm going to do up enough of these bases to play whatever AWI/1812 hex-games I might want and then sell the rest.

Up next: A huge Rus DBA army is starting to get painted.
at 5:52 PM

Hi Bob, great idea with the Triarii. I think I see myself going the other way: adding some more Principes types to my Republicans to morph them into Marian cohorts (eventually). It's good to see someone else doing something similar.