I managed to finally get this huge lot of Russians off my painting table! It is a combined DBA Early Rus (III/48) and Rus (III/78) all-option army. There are 66 foot and 19 mounted figures on 24 bases. All of the figures are Old Glory (except perhaps one Essex). The entire army is arrayed below except that one base of spear was left behind on the paint table.

The core of this army are 11 bases of 4Sp. All have highly detailed shields typical of Old Glory--etched detail. All the 4Sp bases are included in this photo.

There are also 2 bases of 4Bd, including a foot general (base with horn and guy with axe). 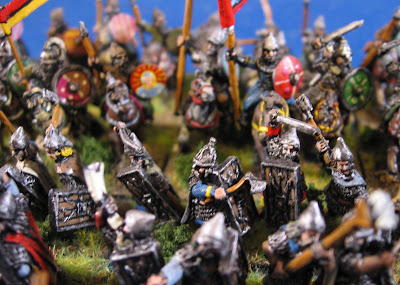 And two bases of 2Ps.

There is one base of 3Ax. 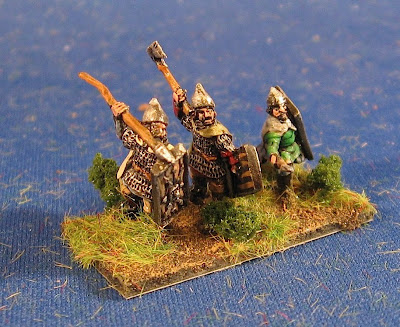 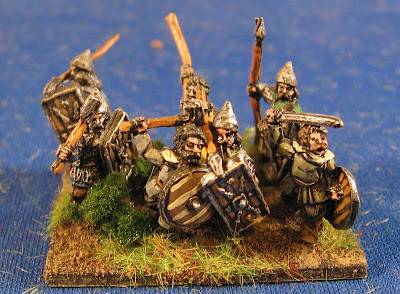 The cavalry include 3 bases of 3Cv in heavy armor (including a Cv General).

There are also two more bases of 3Cv to represent some heavier steppe mounted troops.

Up next: Some 28mm Roman cavalry from Wargames Factory, three 15mm female Irish from Trey Corbies and I understand a 15mm Carthaginian army is on its way as a painting commission.
at 12:37 PM

I have some Volga Bulgars on the way who say your fancy Rus in need serious looting.

Thanks guys. The Rus are on their way to a new home this afternoon (foot loose and land hungry). Next up some Corvus Belli Carthaginians. Sweet figures but getting the elephant's ears to stay stuck on is interesting work!

Your ability to toss an army together with (seemingly) no effort always astounds and entertains.

Thanks guys. Buying job lots online means I often have lots of stuff laying about so I can usually find something that fits the bill to fill out an army. And the Old Gory (for all of their detractors) are pretty easy to paint. Lots of detail etched on the figure and minimal assembly. I think the key is shield painting and I'm really trying to improve--mostly mimicking stuff I saw Tim do a couple of years because before he turned his back on 15mm :).