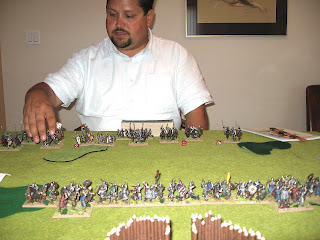 I popped over to Chris' new pad last night to deliver a piece of MDF for gaming and to "teach" him DBA. Of course, he's already played a lot. And he kicked my ass quite handily. I knew I should have cheated... .
Chris pulled out his two 25mm DBA dark age armies painted up by Tim in Saskatoon. There are the Normans and the Anglo-Danes. CVT picked the Normans and I (stupidly) agreed to play the Anglo-Danes. The Normans are basically guys on horses that quick kill the Anglo-Danes.
By contrast, the Anglo-Danes are mostly spear with a few blade and a psiloi. There are a few tricks (psiloi give spear and blades a +1 against mounted, double-ranked spear get a +1 against mounted). But mostly the Anglo-Danes lack punch against a mounted army and, when they lose, it all goes very badly, very quickly. 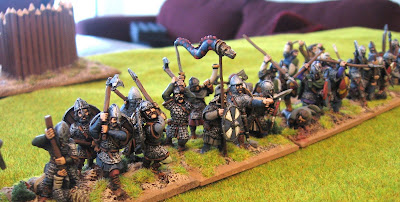 The first game lasted about 7 minutes. Now, that isn't the shortest game of DBA I've ever played. But it was close. Chris charged in and quick killed my general. Dick.
On to game two and I hid my general but still could not withstand his cavalry charge. He also sacked my camp. Dick. What a drubbing. By this point I was ready to make up rules.
Game three was the best of the night (for me). I did a better job of placing the terrain. And then I managed to negate his flanking maneuvers. So it came down to the charge. Amazingly, I managed to last through three rounds of combat and even had a lead at one point.
Then things went badly. And my troops folded up. But I would be keen to give this a go again now that I have a sense of what worked (or doesn't...) with the Anglo Danes. 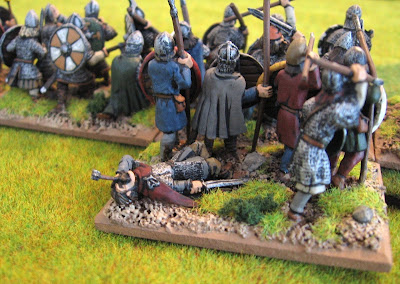 I presume Tim was trying to give us a sense of Hastings when he painted up the Anglo-Danes (who could double for Saxons). It was a bit disheartening to see the guy with the arrow through the eye right from the get-go, though... . 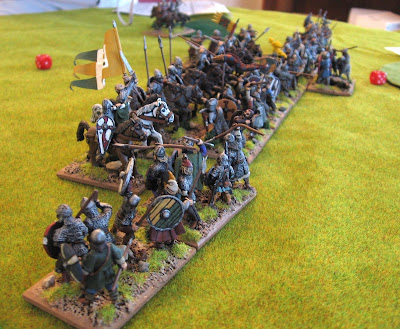 Coming soon: Some painted reinforcements for Marks' 15mm Ancient Spanish DBA army (like he needs more options...). Also some 1/72 fantasy and more rebased 6mm Germans.
This all supposes that the sewer does not back up again and the (unrelated) drywall repairs get done before my vacation ends.
at 7:30 AM

What!? You played three games and he didn't even let you have a chance at playing his precious horsie-boys once?

Yes, the Anglo-Danish are a hard army to play with. I have yet to win a game with them... As you said terrain placement may be key. lots of hills and rivers to defend!

At least he was playing mounted and it was all over quickly. The games I've got in have been against Vikings which is like a slow-motion shoving match that slowly spirals downhill....

I chose to play the Anglo-Dane's three times to try and get a better sense of them. Next time I will win (at least one game). Terrain placement really messed up his deployment so I will do more of that next time--a river must be built immediately!