As part of my summer-long efforts to rebase my 6mm armies on 80mm bases. This allows me to play double-sized DBA, Basic Impetus and CCA. It also makes the 6mm guys look more like an army.
I have been slowly whittling away the pile of 2000-odd Baccus Ancient Germans that I painted up a couple of years ago. I have finished the warbands and I think these turned out pretty well. 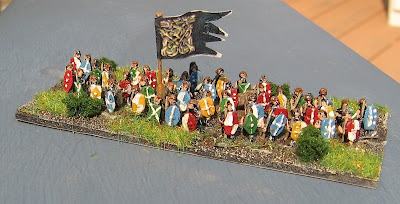 I think they look pretty good when matched up against the more ordered Romans.

I also did a bunch of archers. Unlike the Roman archers (who looked good in formation), I thought the Germans would likely be dispersed and in rough ground.

I thought the same thing with their skirmishers, ergo a rougher terraining was used.

Currently soaking to re-activate the glue are all of the horses as well as a bunch of Heroics and Ros chariots so they can double as Celts. More problematic will be the pike blocks I've been using for Greek states. These strips are held to their bases with white glue. And the pikes are glued to the figures... with white glue. Piss. So that should be exciting!
Up next: Some more 1/72 Rohan. Horse this time. The conversion (cutting off shields and replacing them with round ones) went well; now there is just "some" painting.
at 8:01 AM

Ugh! re-basing is the bane of my existence! At least you've found some system that potentially works for three rule sets... so you shouldn't have to re-base them again for a year or two, right...?

At least all my 25/28mm unit stuff is on bases with a consistent frontage now. I have been pondering re-basing my 20mm stuff... again!?

I do like the look of massed troops on the bigger base!

This is the last rebase. It takes too much time and too high of a toll on the paint jobs to do it again. I'm also done with rules using multiple bases to represent a single unit--that makes no sense and creates all manner of problems with frontages. You should command your army and move your units and let the local commanders sweat the deployment of subunits.

Dude. I love the double wide bases. You are making it hard for me to stick with 40mm wide bases.
I recently rebased my 1/72 DbA stuff to Impetus frontages. I would do double bases but that would make building a DbMM army nigh impossible.
Good work.

I forgot to mention that my 6mm models are based on 40mm frontages.

I forgot to mention that my 6mm models are based on 40mm frontages.