Now that the drywall guy is done (and I can uncover my paint table), I have finished up some of the Rohan heavy infantry. These are a mix of Zvezda and Imex/Emhar vikings.

Again, the Zvezda poses are nicer, in my mind. But the Imex helps fill out the ranks and adds a a few more poses and some diversity in terms of height.

I ended up pinching many of the shields for use in converting some Zvezda Russian Knights so they have round shields (most have those shield-shaped shields). We'll see how that goes!
The basing is the usual. Vinyl floor tile is cut 120x60mm and the backing peeled off. Figures are stuck down, a layer of PVA is applied and sand poured on. When this is dry, I then coat the based in Future floor wax (seals the sand) and (when dry) a drybrushing of orange-brown is used to highlight the "dirt". Then static grass and some clump flocking. 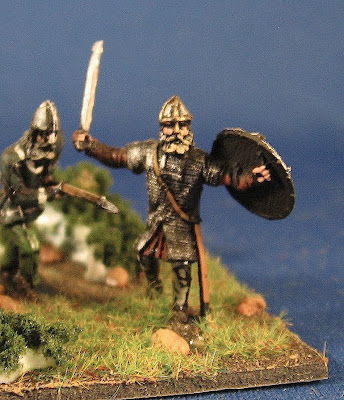 Overall, the effect is pretty good (I think). It is also cheap, durable and easy to do in an assembly line manner. I also think it has the right level of granularity for 1/72 figures.
Next up: Some reinforcements for Mark's 15mm Ancient Spanish DBA army.
at 10:47 AM

So what did you do to these guys that would differentiate them from just plain ol'Vikings? More horses/less ravens on the Shields?

What game system is it for?

Little, actually. Tried to go with more of a brown-green colour scheme but otherwise just painted what I saw. They could always be used as vikings in case I ever lose my 15mm vikings.

The point of the article that I'm painting these for is that it is possible to do LOTR without buying GW figures or rules. Thus I went with the cheapest figures possible (plastics) and am adapting a free rule set.

I'm guess I can do two large, many-optioned forces for about $200 CDN. Not sure what the GW price would be but I'd guess 6 to 10 times that, depending on how many special figures you wanted to buy.