Just off the production line are six stands of 1/72-scale goblin light infantry as part of my army of evil force. These miniatures are from Caesar's Goblins box with a unit leader from their Orc box (or , in the case of this stand, a standard bearer from the goblin box).

These were designed to match the Eureka Miniatures warg riders I showed off a couple of weeks ago. The match is really good which is nice to see. 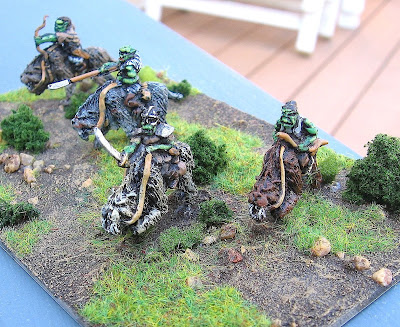 These were very easy to paint up over a black undercoat. The skin painted up fast enough that I could do some wet-on-wet bending to get a nice highlight. You can (hopefully) see that on the backs of these goblins.

I wasn't sure what to do about the orcs. What colour is an orc? I went kind of pig-flesh in colour. Not sure if that was the right choice, but it is clear coated now! 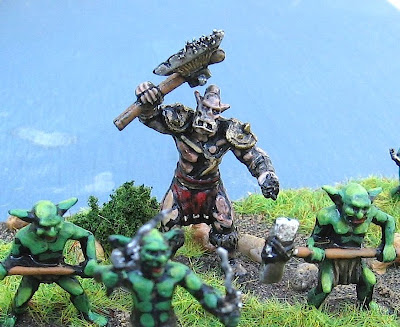 The Caesar figures are nice but a bit more variety would be good. Interestignly, they come as individual pieces instead of on a sprue. That speeds up production quite a lot. 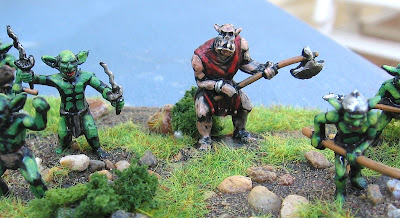 I'm also going to play in Tim's Fall HoTT email campaign. As who is playing whom is a secret, I'll refrain from commenting on which country I control. But I am super pumped about the blind diplomacy. 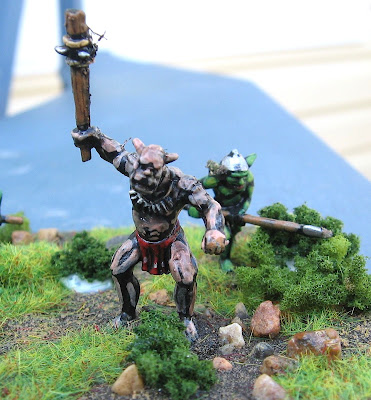 Next up are: Likely some 6mm guys, some 1/72 Rohan cavalry with some conversion work, and some 1/72 elvish bow. Assuming I can get my fingers unstuck from one another.
at 3:17 PM

Those look great, Bob! I especially like all the attention to detail on the bases - it really looks like the sort of broken ground light infantry might do well on.

I see you have the same "can't-wait-for-the-glue-to-dry-before-taking-pictures" problem I have...

Yes, the white glue can take forever to cure and I want pictures now! but the basing is turning out pretty good--must grab some more of these rocks when I'm at Pigeon Lake in September!

Thanks for the comments; I'm currently working on some Russian knights (added in round shields to make them more Rohan) which are a bit of slow going. There is just a lot of detail and it is hard to know what to bother picking out and what to just paint over.

Oh yes, and my vacation ends today so that will slow things down some! Sigh... .