Hey you, in the jail!

I dropped over to Bruce's on Tuesday to try out "Hey you, in the jail!", a meter Pig rule set akin to AK47. I missed the game at the club last Tuesday and Bruce wanted to give some rules amendments a try (primarily adding in three objective markers to force the defenders to move about the table. 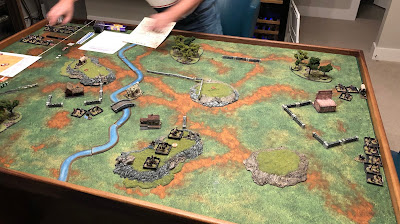 Like many PP rules, there is a pregame map phase that creates a campaign-like feel. I ended up defending three objectives with two units. Bruce arrived on the board with three units and sent one on a flank march. The map game eventually played out in favour with my reinforcements arriving early and Bruce's not arriving at all. 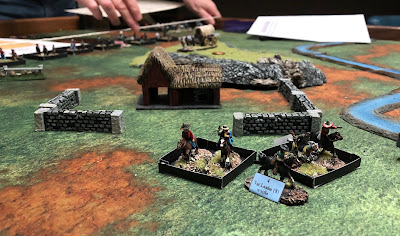 Above you can see my troops loitering at the farm, ready to defend the bridge (out of shot on right) of the objective marker on the hill. Bruce's flankers have just arrived at my rear. 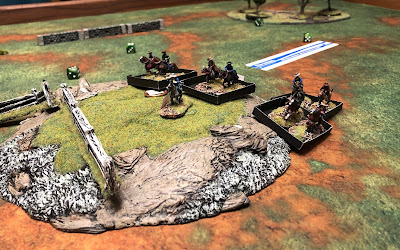 Bruce's main force quickly grabbed the highest value marker in the middle of the table. While a gunfight developed back by the farm. My reinforcements arrived just behind Bruce's flankers. This was heartening but ultimately pointless as I couldn't roll higher than a four all night. 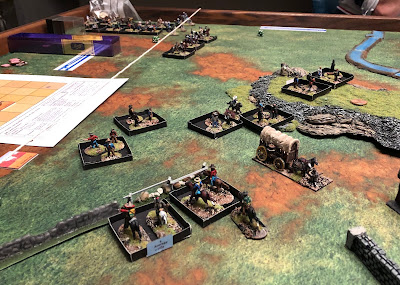 In the main time, I attack one of Bruce's weaker units at range to try and kill off some units (which counted towards the victory total). Alas, the dice deserted me. 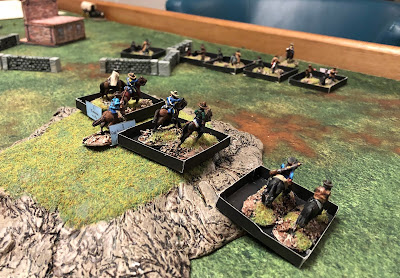 In the end my troops were forced to dash for an objective marker (unsuccessfully) and took a pounding as Bruce handily won the game. I don't recall the score but on my way out Bruce hand me both my coat and my ass, so I suspect it was pretty lopsided! 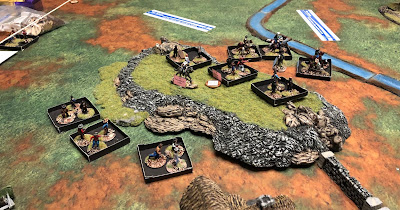 Overall, a fun game. Shooting was pretty ineffective and we talked about lowering the saving scored (so hits stick more often). That said, the rules seemed fine (with the addition to objective markers)--my problems were all dice-related. This rules might well work for the Riel Rebellion.

I'm nw back at the paint table working on more HO-scale buildings and a few more 54mm AWI. I hope to run an AWI game at the club next week.
at 9:52 AM