All I want for Xmas are some 54mm French cavalry

Merry Christmas to everyone! I recently finished up some 54mm French cavalry for Tricorne. These are Armies in Plastic AWI cavalry that I slightly modified the hats on. 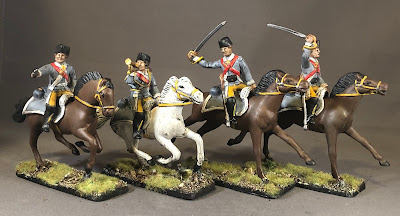 It isn't perfectly clear what kind of cavalry were involved in the various battles in Tricorne (dragoon or hussars) so I based the paint scheme on the Mollo plate of the hussars. I couldn't find any putty locally to deal with the hats so I left them a vague "light infantry" shape. 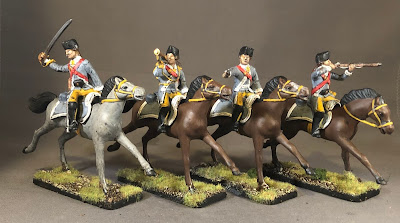 Overall, these will do. The blue jackets shifted a bit towards grey after I washed on some shadows so they might serve as generic dragoons in a pinch. I also found myself short on some cannon so, after some sussing out of options, three more of those are underway.
at 5:00 AM

Merry Christmas to you & the family as well Bob!

Very nice! AIP figures seem to be the 54mm Airfix of this century, at least for modification. I am looking forward to seeing more.

Thanks Alan, you as well. Yes, AiP has handy figures. Availability isn't as good as Airfix used to be but (fortunately) we have google now.