I picked up a mixed lot of Reaper figures on the internet a few weeks back, thinking they would be useful to Pulp Alley and Dragons Rampant.

First up were four ogres. They got a white undercoat and then a bunch of washes. They are big figures (28mm Batgirl for scale). 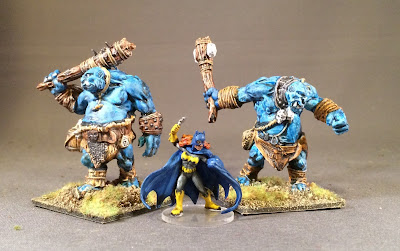 Each of the poses is unique and there is one armoured fellow. 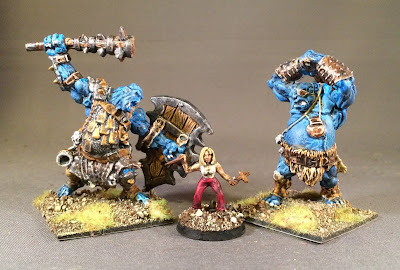 I'm still getting the hang of pictures with white undercoats (the figures glow more for the camera than for my eye) but the musculature turned out nice enough. 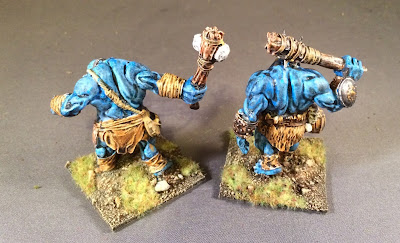 I also painted up four Hallowe'en-themed pumpkin figures. Again, white undercoat with washes and some highlights. 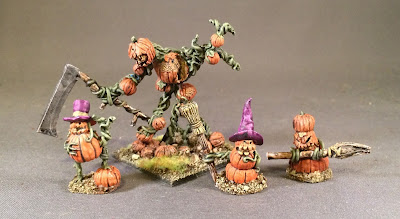 The pumpkin-vine creature is really big (25mm Buffy for scale). The orange looks a touch washed out here and pops more in person. 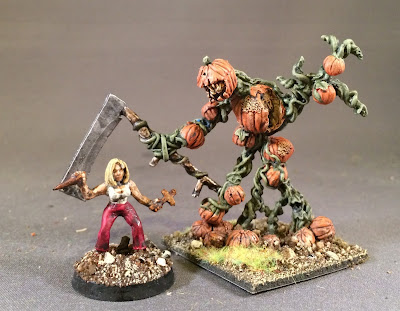 Up next: A bunch more 25mm figures are on the workbench--awaiting a delivery of clear plastic bases.
at 5:00 AM

Nice work!. Love the ogres, i got a few before christmas to use as 20mm giants and i have to say size wise they fit the bill, lovely sculpts, lots of movement.

Nicely done Bob, remind me to show you the pumpkin headed Warmachine Grimken boxes at Red Claw on club night! They will be more nice additions to what I can only assume will be a Halloween themed game!

Thanks. I think they would work as giants for my 15mm fantasy troops.