Bruce hosted a game of Crusader Rex on Tuesday. I'd never played so picked the Saracens (green) to try. The first part of the game seems to favour them while the Crusaders must build their strength. 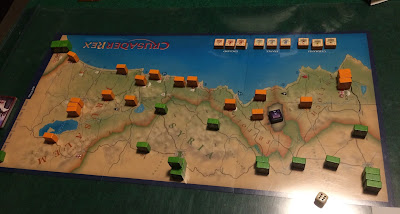 I decided to get while the getting was good and invested Antioch in the north... 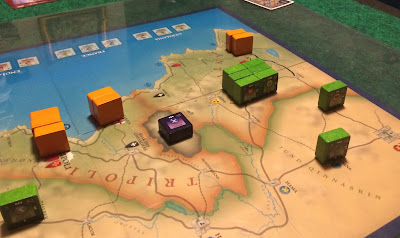 ...and Jerusalem in the south and bagged both. By the end of the first year I had a lot of control but my troops were pretty beaten up. It took me awhile to get the hand of reinforcements and building troops.

Bruce took advantage of that and nearly bagged Egypt (Cairo?). Then his crusaders started showing up and he pushed in to the north.

Fortunately for me, he ran out of time. A big part of winning turn don a slight mistake he made early on (compounded by some unpredictable card play effects) that cost him several blocks in Egypt. But I'd rather be lucky than good anyhow!
at 5:00 AM