Two weeks ago, Bruce and I played the newest version of Crusader Rex with an eye to using it as a campaign engine for miniature games. Overall, an okay game but the version 2 rules forced some dispersion on the troops and made storming fortresses tough to win (which both augur against battles).

Bruce hauled out the versions 1.4 rules this past week and we tried again. The major differences were a change in victory conditions, easier storming of forts, and higher levels of troop support. The early game saw the Saracens grab the mid-board (which may have been a strategic error--it was only my second game).

Not a lot changed in the mid-game, but I didn't inflict many casualties which was bad for green as the game swings towards the Franks as it progresses.

Bruce attacked in the south and ran into my insanely hot dice. Poor guy! 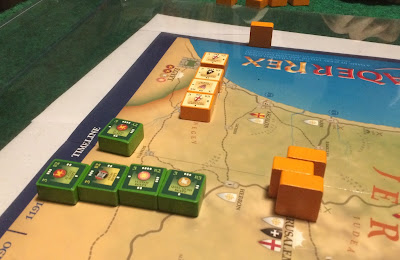 Dice also thwarted some pretty nice spoiling moves he made as I positioned for an attack on Jerusalem. We did generate five battle (I think) that are gameable.

In the end, it was out of reach for the Franks in the last year as we called it as a very marginal victory for the Saracens. Overall, I like the v.1.4 rules better (except maybe the lower victory value of for Jerusalem--a higher value motivates behaviour more in keeping with the politics).

Overall, a good game with bad strategy being saved with hot dice (story of my life!).
at 5:00 AM