Last week, I received my copy of 1754 by Academy Games. Basically the FIW at one level of detail greater than Risk. It uses the same card-driven play and random turn sequence as 1775 and 1812. 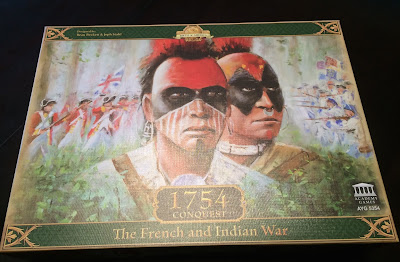 Bruce popped over Monday and we had a quick run through it. There are a couple of key differences. The regular reinforcements always arrive by sea while the colonial reinforcements appear at muster points (one is fixed and one you can select the location of). 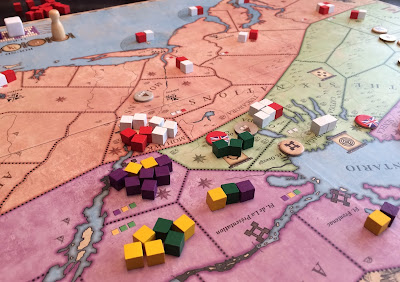 Indian allies functions basically the same at 1775 but their reinforcements arrive in varying locations depending upon when in the turn sequence they are activated (a very slick mechanic that adds a nice randomness). There are also forts which are handled via a defender die roll (allowing the defender to sometimes block an attacker's subsequent kill)--also petty slick. 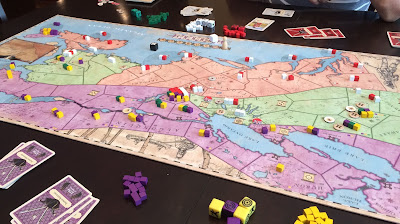 The final difference is sea movement. There are various ports that have sea zones associated with them. (You can see the sea zone outside of Boston below.) On the regulars' turns, you can move units into these sea zones (basically load transports) then move to any other sea zone, and unload (or battle if the sea zone is occupied). This makes sea transport more important and interesting, especially since your regulars always appear in a sea zone and you have to unload them on land. 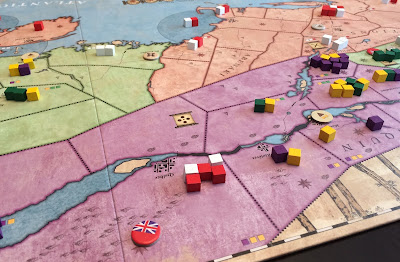 In our game, we started with a tustle in the Ohio Valley and along Lake Champlain. Bruce then drove up Lake Champlain (or maybe moved by land through Appalachia) and bagged Quebec. C'est domage!  I managed to get it back and drove south towards Albany, grabbing one of his muster points. The rivers and lakes don't really serve as major transportation routes but the way the areas are laid out provides a similar effect. 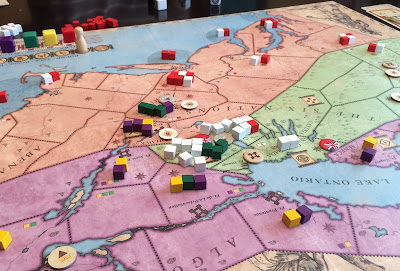 In Nova Scotia, I made an effort to push him back and secure Louisburg from attack. The winner is determined based on victory areas held so this also contributed towards my victory conditions. With Nova Scotia safe, I then mounted an expedition by sea into the Chesapeake. Surprise! 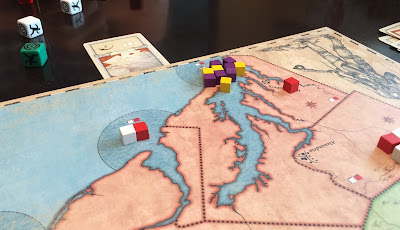 A smart player would have used this as an opportunity to secure the Ohio Valley and the victory points there... . I chose to push into New England and got crushed. To be fair, it really cost Bruce a lot of effort to stop this, but I basically threw these troops away. In the end, I had enough victory points that I chose to play both my truce cards and end the game after 5 (I think) turns. 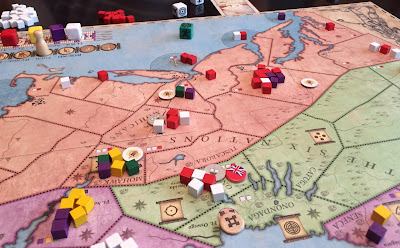 We only played one rule incorrectly (about withdrawing from combat in enemy territory) but it likely wasn't a big deal in light of Bruce's atrocious dice rolling (I kept looking around expecting to see Scott lurking nearby). I'm going to bring this out to the club next week.
at 5:00 AM