Nice weather draws me out of the house and into the yard. But spring, being what it is, means there are still days when gaming is the only option! 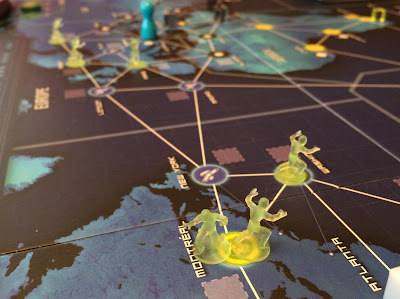 At home, we've playing Pandemic Legacy. We're in May and faced our first loss. I had under-estimated the effect of the faded and had a hard time thinking strategy while remembering all of the new rules that have emerged. We need to play more often was our conclusion. 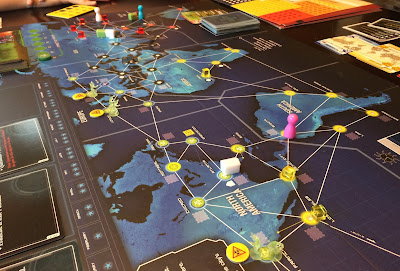 We managed to win our second game and make a number of roadblocks permanent in order to contain the mutating virus to North America (which is now deeply messed up). I think we also have a better selection of characters to help keep stuff under control. 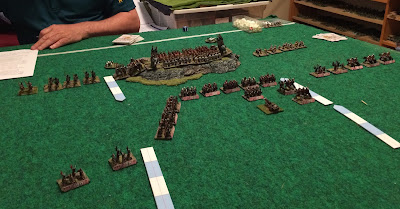 Tuesday, I was out at Bruce's to conclude our Aurelian/Punic Wars campaign. This was a big battle in Gail between Hannibal and Scipio. I was the attacker and had to capture two objectives (the sheep) in order to win.

I decided my best play was to try to push around the right flank and then get my horses moving to bag both objectives. That meant refusing my left flank. 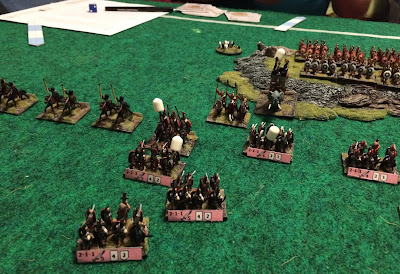 I had good luck pushing around on the right. I had less luck containing Bruce push agains my left. 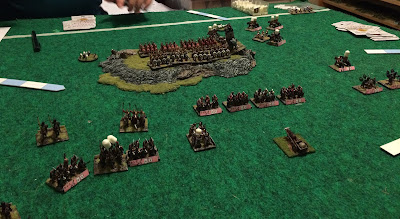 Some good (or lucky) card play allows me to get around behind Bruce before he ran my hand down by capturing my baggage. 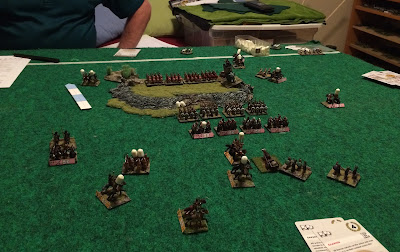 Campaign-wise, this put Carthage in a bad economic position. Coupled with a political defection of an African province last time, we decided it was likely unwinnable for Carthage and called it.
at 5:00 AM

I think the turning point was my disasterious naval invasion of Sicily. The high casualties caused Lycia to defect on the ensuing diplomatic die-roll and that tilted the economics in Rome's favour. Great Campaign game, though. I love the way military, economics and diplomacy all interact

Yes, I agree--that was a bit of bad luck that really turned the tide. A less stormy crossing and Rome would be been in the soup for sure.