When we last left our heroes, Batman and Batgirl had rescued Robin from the clutches of the Joker. But the Joker managed to knock out and spirit away Batman. With Bruce coming over, I thought I would pick things up where I left off with the play tests.

Joker has placed Batman on a giant pile of TNT and is going to blow him to kingdom come as the news choopers circle. Robin and Batgirl (with a couple of beat cops) must free Bats to win. Joker wins by blowing Batman up. Unfortunately, karma lives up to its reputation and he forgot the detonator in the car so he has to retrieve it before Bats goes boom. 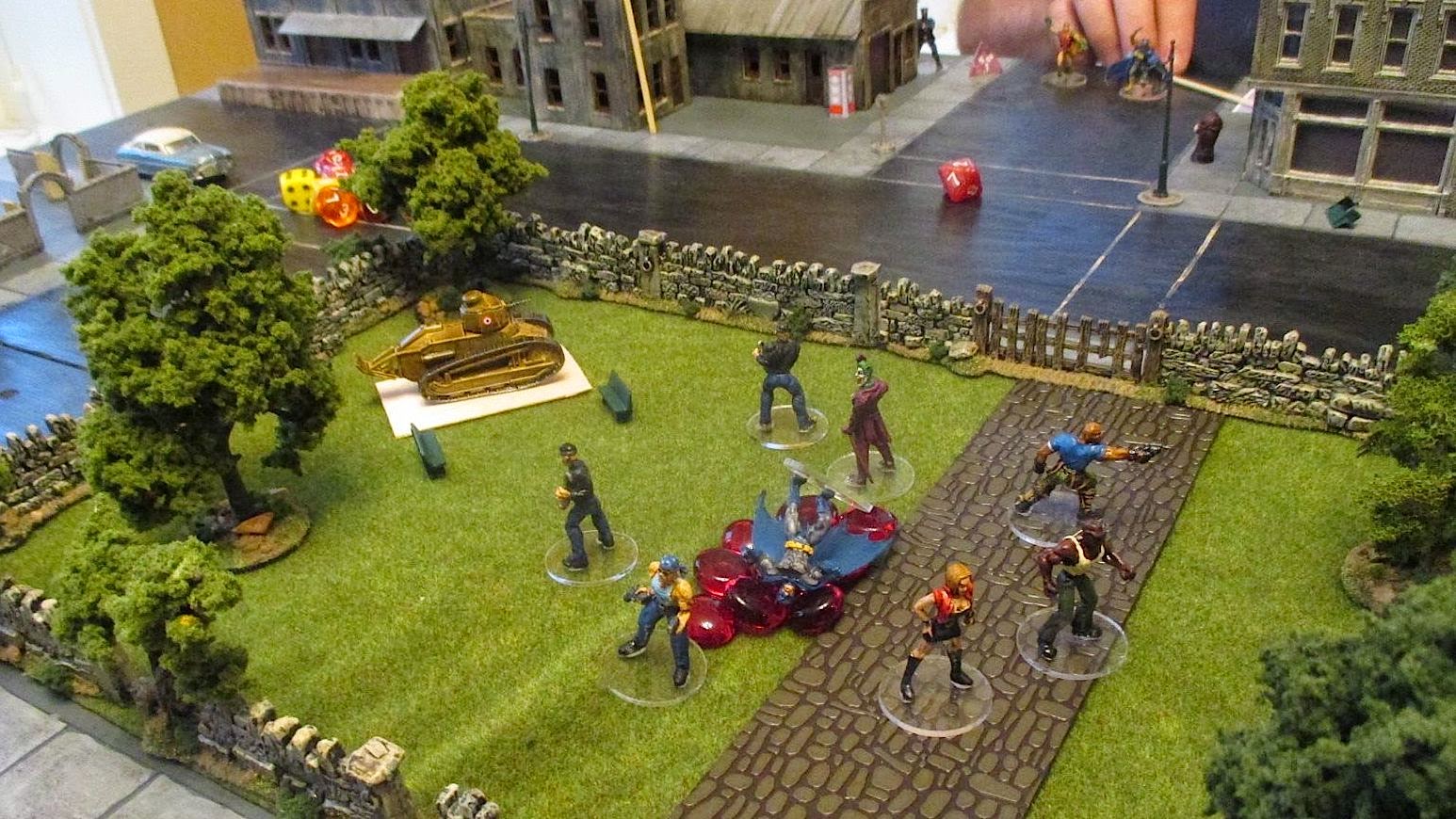 Robin and Batgirl enter on the east edge of the table as I walked Bruce through the rules. Joker dispatches a goon to go get the car while Batgirl Batarangs the baddies and Robin charges forward into melee. 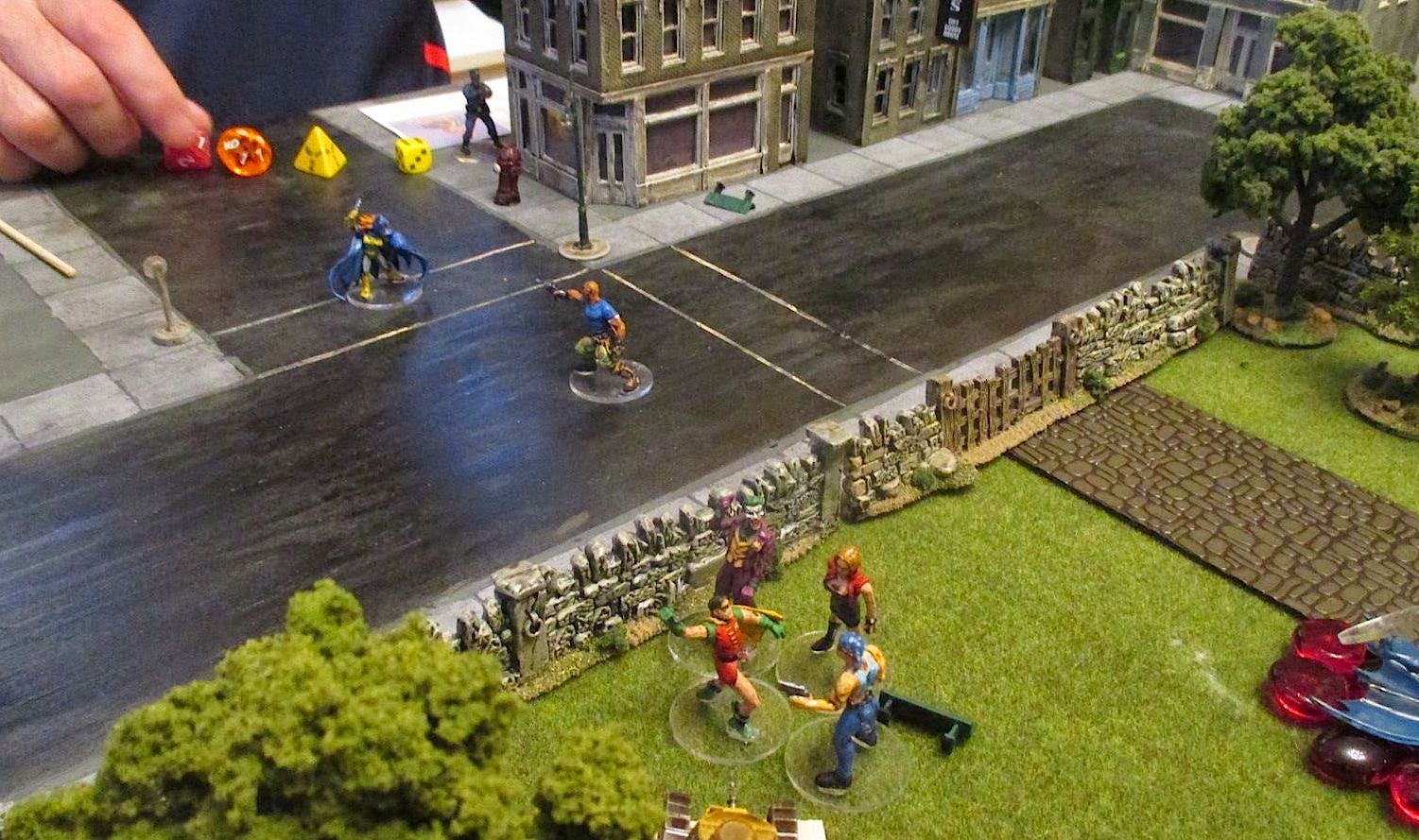 Batgirl (with the help of a cop) drives off a bad guy. When I modify her character, she needs some better melee stats to give her a chance in a fight. maybe a fierce kick on he first round of melee? 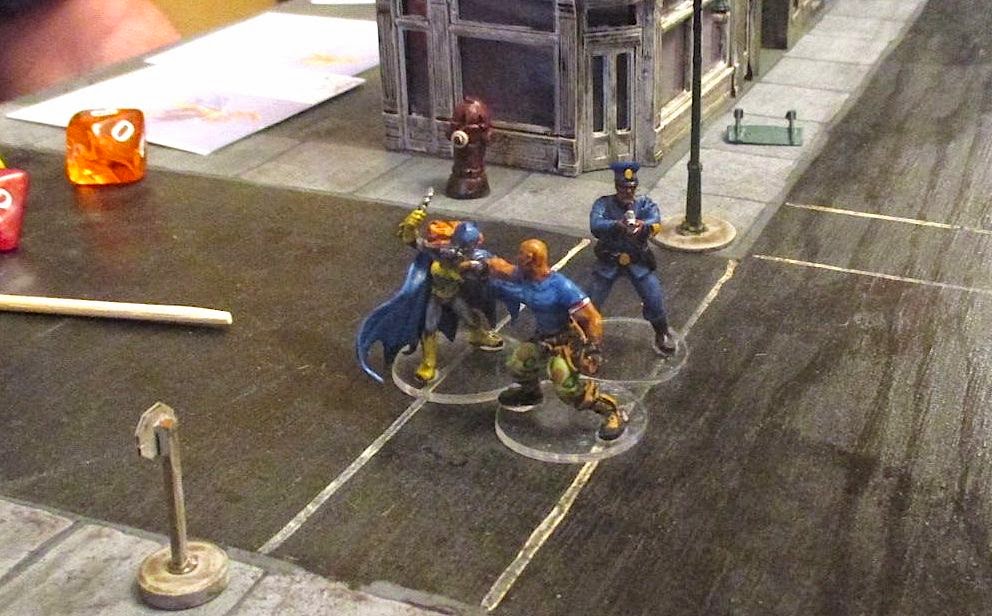 Meanwhile, Joker unleashes his secret weapon: the tank on the war memorial has been roboticized and charges forward, spraying hot death! Unfortunately, Joker's goon can't seem to get the car door open to get the detonator so Joker has to head over to help. Meanwhile, Robin jumps on the tank and pulls a Batlimpet mine from his belt (hmmm...) and tries to blow up the tank.

Batgirl gets KOed by the Joker's hand-buzzer and Joker managed to get the car going. Robin runs over and wakes her with some Batsmelling salt, just in time to dive out of the way of the Joker's car. Robin disables it with a dart but the Joker uses a banked action to bail out of the car and run towards Batman.

Dodging a hail of batarangs, Joker manages to affix the detonator and pull the trigger. Bats disappears in a huge explosion... as does the Joker, since he's idiotically standing right beside bomb. Have Gotham's fiercest enemies gone to meet their maker together? Or will they meet once again on the streets?

Overall, an okay first time out with another player. Bruce is a quick study and I think we had fun. A few more figures might have created a more fluid game, but I didn't want too much complexity. Batgirl and Robin were at a severe disadvantage in hand-to-hand and Batgirl got drawn off to chase Joker instead of rushing to free Batman.
at 5:00 AM

Cool terrain and figures; looks like a great time.

We'll see. Daughter wants to give this a try after seeing Bruce and I play it.

Thanks Dean--yeah, a nice light game. Hard to take superheroes very seriously and the competitive die rolls mean you are always doing some.