With the family away, I brought my superhero terrain out of the basement, both to see what it looked like in good lighting and for a playtest of Power Legion. I played about a 1700 point game, with Batman and Batgirl taking on Joker, Riddler, Harley Quinn and five goons.

The bad guys' goal was to get the car (just visible in the picture below) off the south side of the board. The good guys' was to apprehend the bad guys. Entry points were randomly diced, with Batgirl and Batman starting on the west and east sides of the board, respectively. Most of the bad guys started out on the south side (two different entry points) except a lone goon who started on the north.

In the SE corner, the Riddler and Joker begin to make towards the park, in the hope of short-cutting across to the car. Predictably, Batman shows up and moves to cut them off. I wanted to try out Batman's swinging lines ability, but the activation dice would not cooperate while he was near appropriate terrain so he had to hoof it into contact.

The Joker hauls butt while trying to keep some separate from Batman. Meanwhile, off camera, Batgirl climbs up on top of the mill to get the drop of Harley Quinn and her posse of goons. 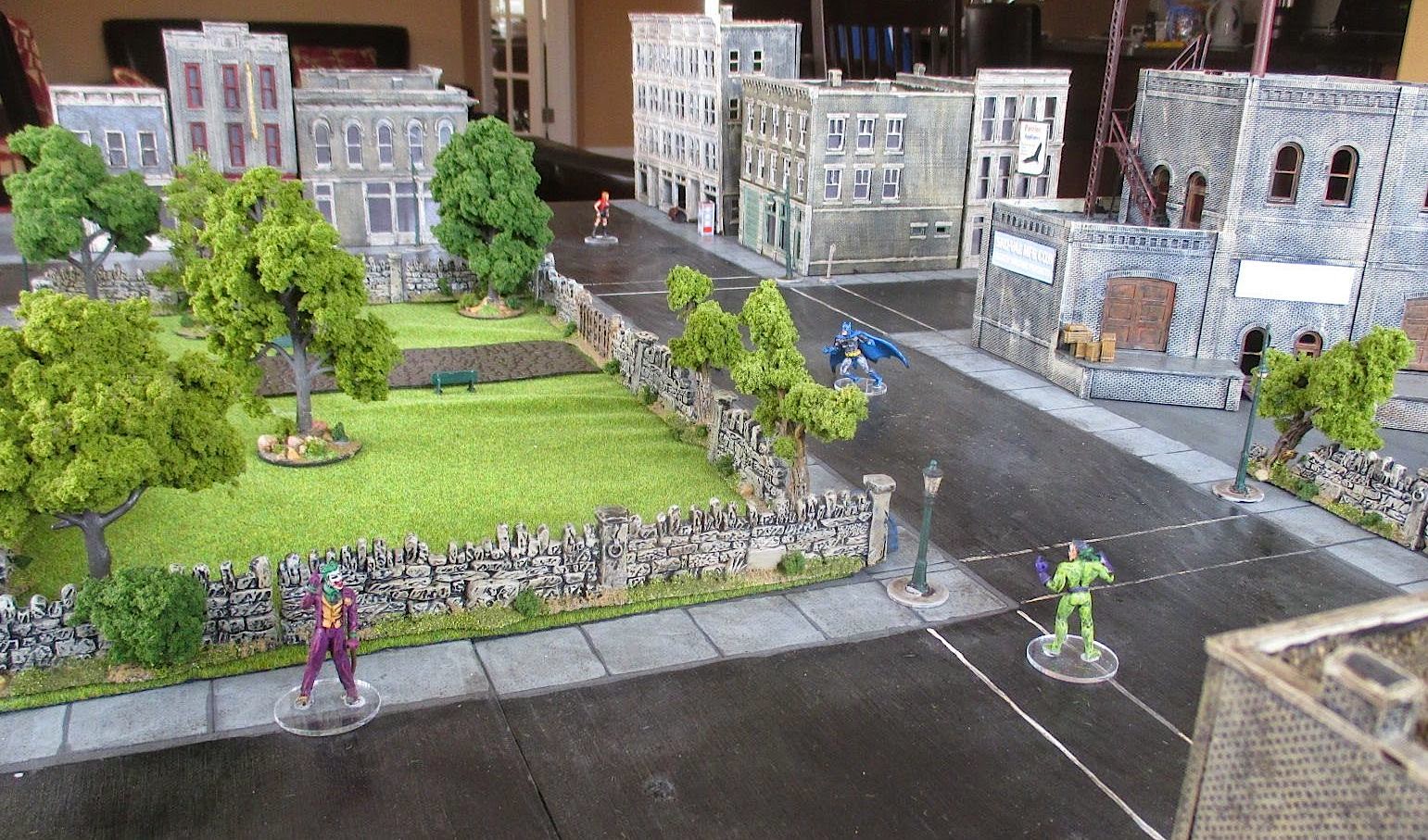 Batman rolls well and charges forward, slamming into Riddler and KOing him! One of the goons tries the same trick, but Bats sidesteps the charge. I think I played the zone of control rules incorrectly on Batman's next action, although I don't think the goon would have had much of a chance to hurt Batman.

Leaving the confused goon and unconscious Riddler behind, Bats charges after Joker, who has met up with Harley Quinn on the SW corner of the board. Bats charges past a goon to wind up in a brawl with Joker. Joker tries everything, including Joker gas, but eventually gets his ass handed to him by Batman and is KOed. In the meantime, Batgirl continues to whip batarangs left and right as the goons close in on Batman. 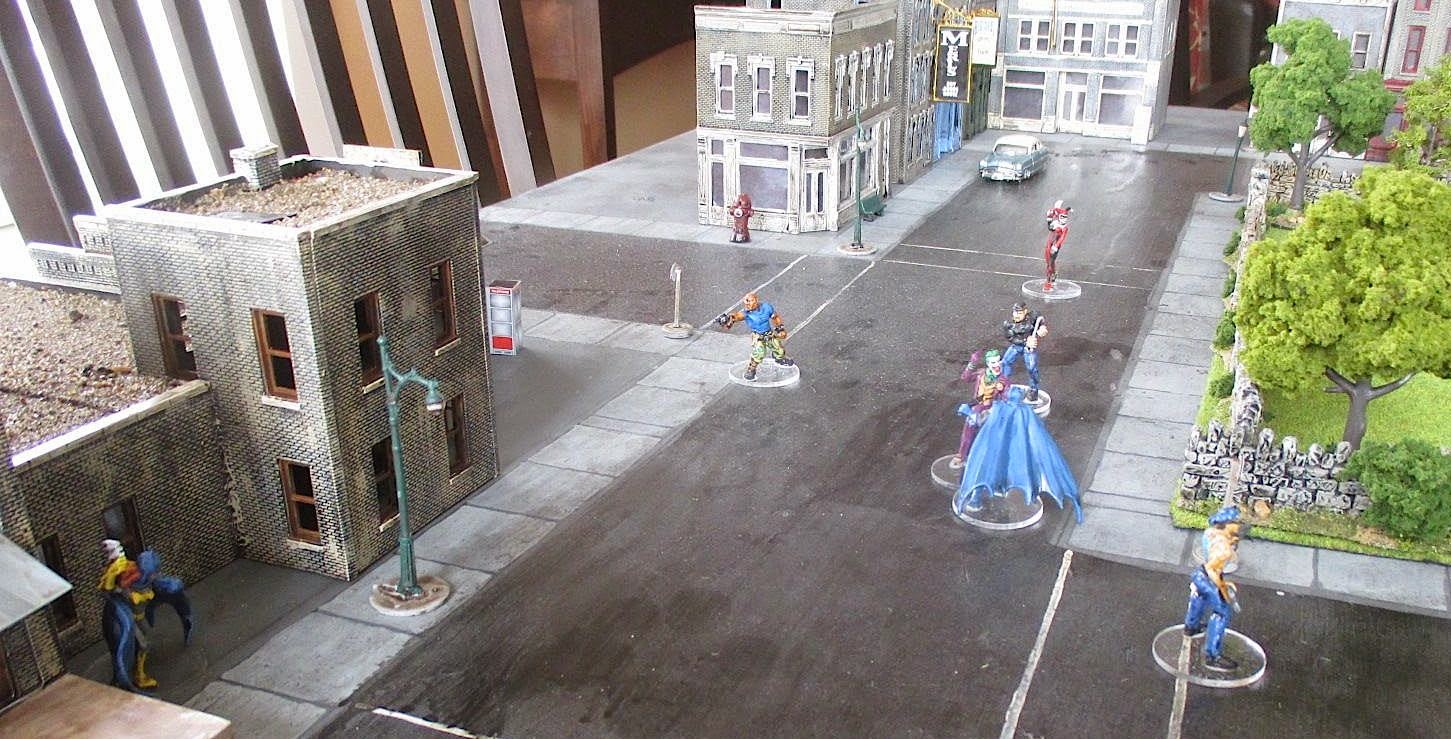 Batman gets bogged down with fighting goons (again, I know I played this wrong). Batgirl uses a batarang to knock out the lone goon who came in from the north as she tried to get into the car. Seeing that this is going badly and her gun has little effect on the well-armoured Bat-types, Harley Quinn power jumps to the car.

Harley Quinn guns the car at Batgirl, who barely manages to dodge. As the car goes by, Batgirl pulls some Batcaltrops from her utility belt and flattens the car's tires (reducing its speed over the next two turns). Batman manages to get free of the goons with enough actions left to spray some Batfoam on the windows, blinding Harley Quinn (random die for direction instead of allowing her to run Batman down).

The car rolls to a stop and Harley Quinn bails out. Batarangs fly while the goons get up to tangle with Batman again. Harley Quinn throws two grenades (KOing one of her own guys) and then power jumps off the board. Overall, a convincing win for the good guys.

A fun first play--it felt like a comic book. Batman is hard to stop (even against multiple, powerful opponents), although Batman vs car might have been interesting. Yet he is only one man and can get tied up with multiple opponents pretty easily.

I still have some rules to learn (I completely forgot about fate points) and I found myself flipping through the book a lot. I wonder if a diagrammatic QRS would be helpful? I hope to get another playtest in plus some addition scenery done this week.
at 5:00 AM

Nice report. It did sound like comic book action. Your table looks great too.

Looking fantastic Bob! If you need to borrow terrain for a game, let me know. Some of the stuff Bruce made with the Worldworks stuff, like vehicles, a pile of tires, raised skyrtrain is available for use.

Looks good. Don't feel bad. We got some of the rules wrong on our first game as well. Seeing your clear bases has me rethinking my basing strategy. Did you make them yourself or who did you get them from?

Clear bases are from Litko. Yes, taking me awhile to sort everything out. But enjoying myself.

Beautiful table, Bob. Where are the buildings from? Most of mine are Plasticville (hard to get in the UK) or scratch built. Are they model railway buildings? And a DeLorean wouldn't be out of place on that table...

Of course, if I'd looked further down the blog, I would have answered my own questions, so apologies. May have to look at HO scale, as hadn't considered this a viable option, but your table has changed my mind. ..

Thanks for your note; HO scale Woodland Scenics buildings. They are a bit small but that is okay--heroes outscale their surroundings plus they create the right LOS blocks without to large of a footprint. I have some more items on the way (cars and whatnot).