Bruce hosted a game of Look Sarge, No Charts (WW2). We were both keen to try this after enjoying the Napoleonic version a few weeks back. The scenario was a three-battalion (roughly) Allied attack in Normandy against battalion of elite Germans. The Allies' objectives were to grab the three victory markers (poker chip). 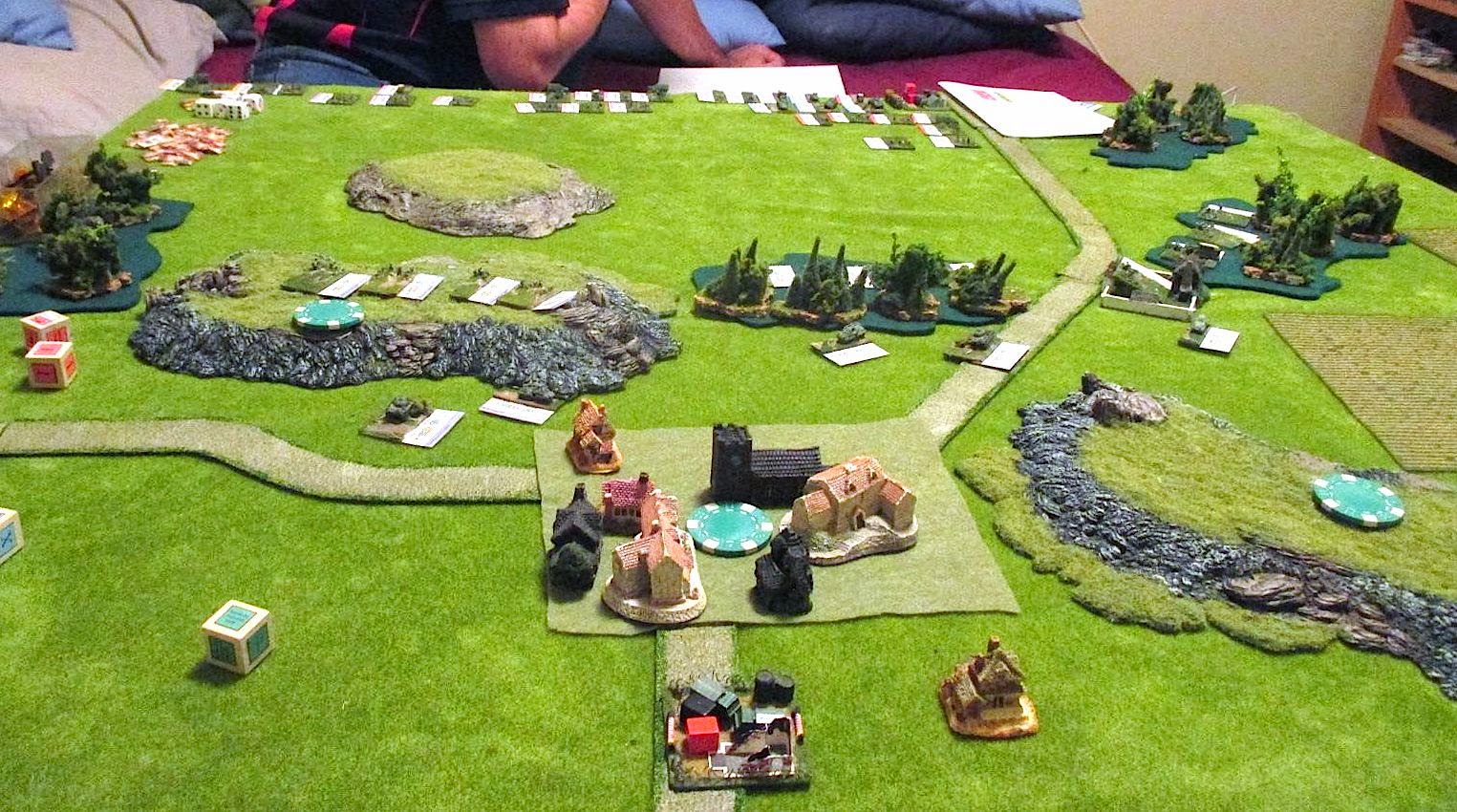 The game has each unit assigned a number (1-6) by dice roll each turn with some dice swapping allowed. Then playing cards are turned to activate the corresponding units. You can activate up to twice in a turn but a joker ends a turn. Bruce advanced on a broad front and my guns (right side) lit up some of his lead elements. He was unable to spot my guys (bad dice) so couldn't return fire.

Then this unit of Germans ran low on ammo (frig!). Below, you can see the ammo truck with a red ammo cube moveingfrom my supply base (bottom centre of the top picture) to re-supply. Low ammo degrades combat abilities. You can also run low on fuel. The Germans had way fewer supplies than the Allies (but shorter distances) so over the long haul, resource depletion was going to be a factor.

Above, you can also see the game progressed at a pace whereby I was actually able to have units fall back to a second line. This almost never happens in war games; instead everyone dies in place. In effect, I was able to trade space for time and force Bruce's troops on the refused side to cross open ground twice. A very cool gaming effect.

Later in the game, Bruce managed to move up on the German left, flank and assault. My left unit ran out of ammo and was permanent degraded (no supplies left) so I was about to pull back. Below, you can see also one of my tanks sitting on a road, enfilading the Allied advance on the right. Eventually, Bruce's troops ran out of gas (figuratively) before they could fully take advantage of my supply problems. He pulled back. I expect I would have had to either re-fight this battle (with slight fewer troops) the next day or pull back (that would depend upon re-supply).

All told, a highly enjoyable WW2 game. Interesting sighting and overwatch mechanics. The Germans took a pounding but their morale mostly let them shake that off--their problem was with limited ammo. The Allies were just a human wave of troops and only good luck allowed the Germans to thwart them. But supply problems likely mean this victory is pretty hollow.

Up next: I'm still working on some 15mm WW2 mountain troops. I'm down to gun metal, uniform details (likely just the cap insignia) and then basing so likely this weekend. The club is Tuesday.
at 6:42 AM