I had six guys over for a round robin of DBA today, with Dave and I being declared co-first men of Glenora, with the edge going to Dave as he put the boots to me during our one head-to-head game. Below you can see Dave receiving yet another kick in the nuts as Justin's Normans ride down his viking hordes. 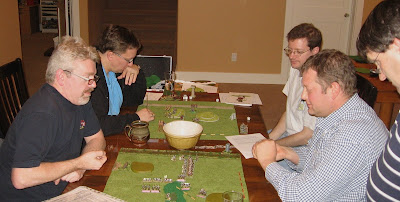 Mark brought his Persians, Bruce brought Selucids, and Terry brought his Ancient Spanish. I loaned Justin some Normans, Dave some Vikings and Craig the Scots-Irish. I played Middle Saxons. Everyone should be commended for gamely faking their way through the rules the first game or to. 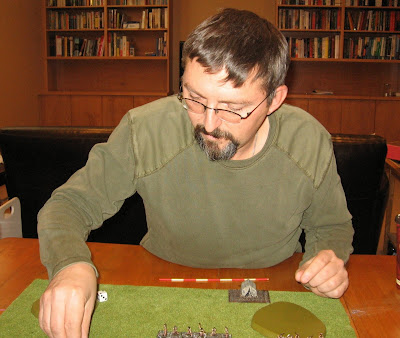 Above we have Terry, who fought to a mixed result with his ancient Spanish. After two tough losses, suddenly he caught fire and put the boots to Bruce's Selucids through cagey use of rough terrain. The auxilia heavy army is a tough one to beat once you get the hang of it as Mark put me through an awful beat down with one about a month back.

Speaking of Mark, you can see his lovely Persian army above, with scythed chariot, war wagon, huge archer stands, and camelry. He took a lot of ribbing over this colourful and gimmick-laden horde ("the playmobile army" was the funniest line), but it was tough to beat and saw him to a third-place finish. 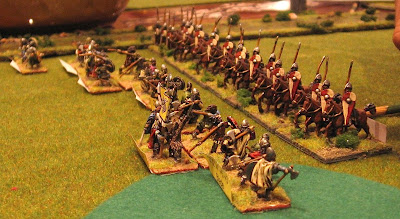 An interesting match-up was Dave's Vikings versus Justin's Normans. Usually the Vikings (10 blades, 1 warband and 1 psiloi) just beat the hell out of everything else. But the Normans are a nice match and I'm not sure (other than with very careful terrain placement) that the Vikings have much hope. 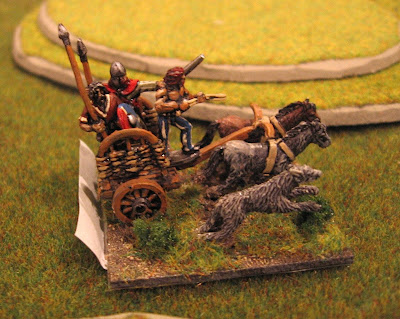 I never-ran into Craig's Scot-Irish but they had way cool chariots. I would actually like to play a game against them to see what they can do. I spent much of the tourney trying to learn how to make the hordes work--I'm slowly getting the hang of it--but it is tough going. 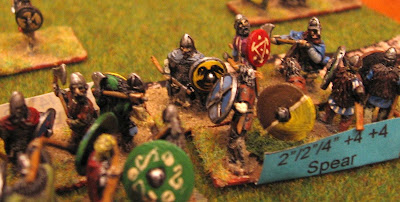 Thanks to everyone who came out. We'll have to do something similar (maybe a different games system) over the Christmas holiday.
Up next: Some 15mm Rus are just about done. If my back cooperates, maybe even this weekend. Then I have some 15mm Romans ready to paint but will likely work in a few more 1.72 before getting to the Romans.
at 3:18 PM

I love the irish wolf hound on the Scots-Irish chariot base - it made my day!

Those are some great looking armies you guys got there!

"Cagey" use of rough terrain!? Pfft! I think it's the only way to have a hope of winning with an Auxillia and/or Psiloi, or even Warband-based armies. Hide in the woods and say "Come and get me!". I'm working on some Irish right now that will be of a similar make up and keen to try them out against some of their contemporaries... Nasty Normans and Bladey Vikings!

I played a battle last week with Normans and Vikings... I don't know how the vikings could win it either!? Unless they got lucky at the same time the Norman player got stupid - like Gary (the fellow playing the vikings against my Normans) nearly did!

Sounds like a fun day guys. I wasn't able to make it because I don't get a day off from work though. See you all on Tuesday!

Chen: If not a day off then you should get compensate as per the Employment Standards Code... .

Yes, I know. We get that day counted toward Christmas.