With a double-sized game of Lord of the Rings Basic Impetus looming in six days, I'm pushing hard to get a few more "good" troops done. These comprise some 200 plastic medieval fellows Dave passed on to me last weekend. 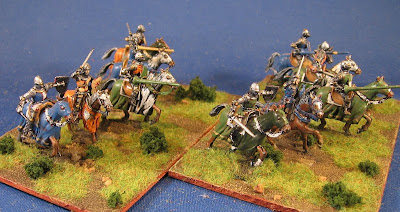 So far I have based up all of the painted ones. Then I repainted two bases worth of cavalry. These are a bit more plate-mailed than I would like but I didn't have enough time to acquire Strelets Normans. Anyhow, these will do; the repaint of them was pretty quick and dirty! 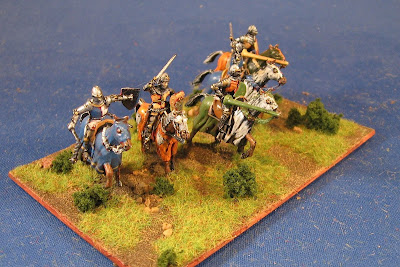 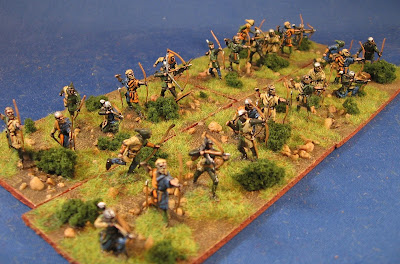 I painted them in matching colours to the foot Dave gave me. 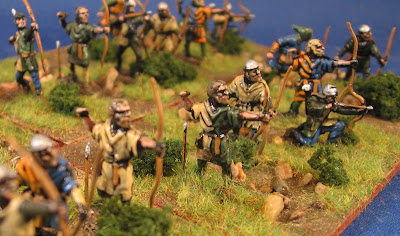 The different style of cloaks makes them look more like reservists (which is what I figure archers would likely be). Overall, a nice effect.

Up next: On sticks right now are a bunch of heavier foot (mostly Revel Normans). I have almost finished the paint job (belts and a wash are left) so I hope to crank these out this weekend. I also have a small 15mm dwarf army n sticks and primered. They are next, followed by some Ancient Brits for Chris.
at 9:54 AM

I have to admit a very fond affection for the Airfix Robin Hood figures. They were my first 1/72nd soldiers - great to see them in the service of Gondor - perhaps they're the men of Pinnath Gelin?

Yes, I quite liked the set--nice dark ages feel to them. Can you find Robin Hood himself in the picture?