I popped by Mark's place Sunday night to put his new Persian DBA army to the test against his Greeks. It was an interesting game, with fairly divergent armies. Here is his command stand. Looks like the light horse unit on the left has aspirations to be the general... . Untrustworthy Persians! 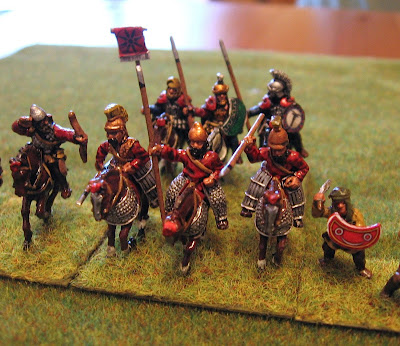 I took the Greeks and we managed three games in about 2 hours. 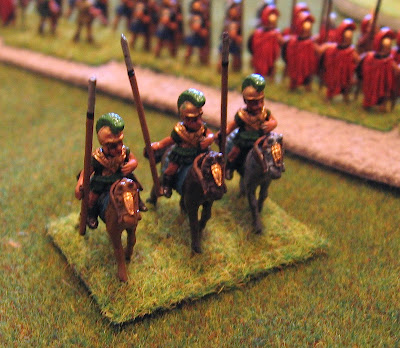 Game one was all Wall! The Greeks marched across the fields, up the steep hill and slammed into his line. 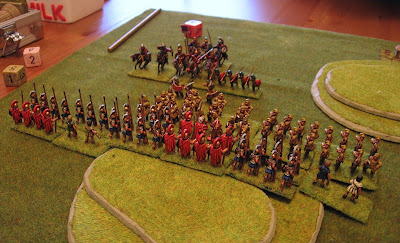 Then the Greek general died at the hands of Mark's Persian bow and that was that. Arse. Game two was better with the Greeks putting the general in the second rank and Mark setting up an almost identical board.

The Greeks then marched across the field on the left, refusing the right. An awkward tangle with the damned bow went down on some steeps hills. Finally a full press on the Persian horde tipped the Persians over the break point. This was close because of Mark's cagey use of terrain.

Mark suggested a third game. I felt pretty cocky as I was the defender and set up a barren field.

The armies then rushed at one another and largely missed. Specifically, the right flank of each army basically contacted with nothing while the centre fought a confused melee and the left part of each line was eliminated. You can see the Persian bow (on the left) trying to come around while the phalanx continue to march forward. 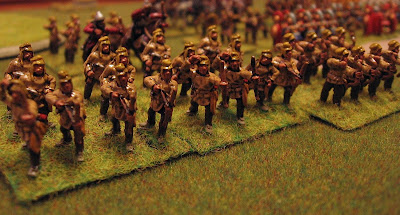 Mark eventually out-maneuvered me and put the boots the the Greeks. The miss favoured his bow a bit. And so did the dice gods (with three turns of 5 or 6 [pips for him and 1 or 2 for me).
Some interesting experiences with the horde. Because they can never recoil, one cannot close the door on them. So their +2 combat factor and 2 pips to move makes them a good anchor for a line. I'm going to try some in my Saxon army. 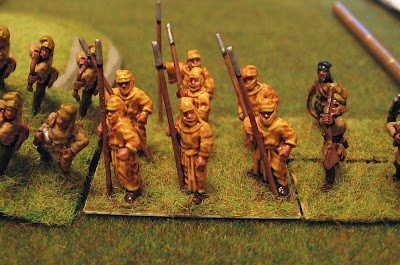 Up next: I'm hopeful to finish up three bases of 1/72 Rohan today and also maybe some 1/72 elf archers. All depends on how cooperative the family (and the weather) is. Sitting primed is a 15mm Roman army to give me a break from 1/72 for a few days.
at 9:03 AM

I hadn't noticed that "hordes don't recoil in DBA" thing before - I've used them in HOTT, but not DBA.... that IS interesting...

Yeah, the lack of recoil also means you can never close the door on them for a quick kill (as the quick kill only triggers when you recoil...) when your wrap around. Very annoying!

Reminds me that I made conversions for some of the exotic persian allied light troops back when, Etheopian and some hill tribes with their wild colors and skin paintings.

Skin painting continues to elude me. I did a bunch of Germans and could likely have put some woad or tattoos on them but just couldn't bring myself to jeopardize the paint job!