So I was cruising fleabay and ran across some older Trek toys that are roughly 25mm. These shuttles and crew are from the old Star Trek Innerspace line. You'd get a ship (scaled to the packaging) and two crew. This shuttle came with a Scotty and Kirk and the lot had four shuttles. 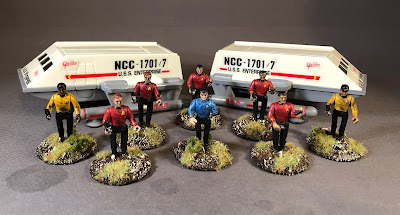 The figures are about 1.25" and are a bit short for 25mm. They also bend at the waist and have moveable arms so they can sit in the ship. Some crazy glue fixed the joints. I already have a good quality Scotty and Kirk, so I repainted these as generic crew (mostly red shirts). 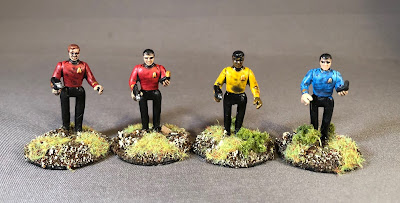 The Kirk figures had phasers so I left this. Scotty had a communicator. I fabricated some phasers to go with them (below). 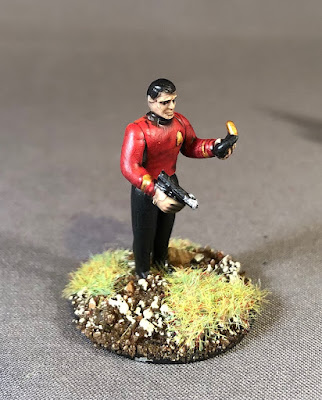 I put them next to some other figures for a size comparison. The giant on the left is a heroclix--notionall 28mm, but probably more like 30mm. The two yellow shirts are 25mm Monopoly tokens (Chekov and Kirk). Pretty decent fit with the smaller figures despite the wonky hip joints.

The shuttles open up for play purposes. I don't see that having much gaming utility but it is kind of cool. 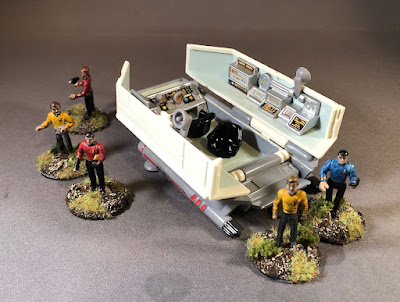 The shuttle is also about 3/4rd of the scale of the figures (which is roughly what the TV sets were). 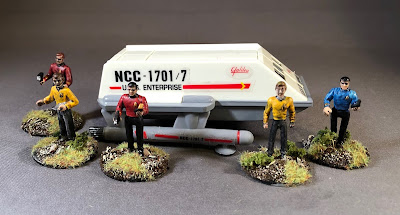 Overall, these were a nice find. I have some Klingons for a different playlet underway.