We had eight guys out at the club this week. There was a game of Commands & Colors Napoleonics and I ran a Hallowe'en-themed game of Pulp Alley using some not-Lego figures I've collected.

The premise was that an all-night rave in the Rocky Cove cemetery has gone (predictably) wrong with four groups of zombies chasing 20 costumed party goers across the table (4 of whom are actually horrifying henchmen and minor plot points). The major plot appears when all four henchmen have been unmasked. 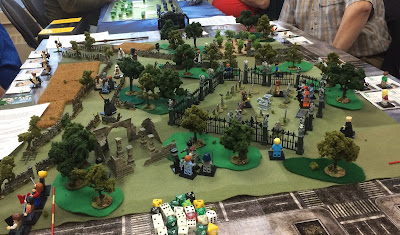 Enter four groups of adventurers who have all been brought to the cemetery on slightly different missions. 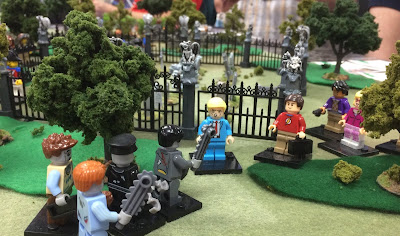 Things opened a bit chaotically with the Big Bang Theory (BBT) discovering a defeating one of the four henchmen right out of the gate. The zombies shuffled about, chasing this costumed Trump impersonator into the hands of the BBT. 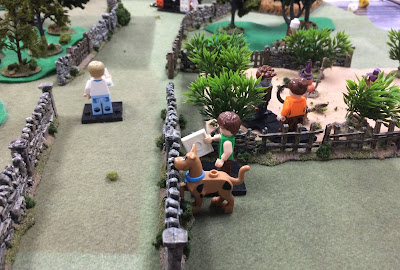 Meanwhile, the Scooby-Doo Gang (SDG) entered the board and tried to rescue some teens and find some fiends. Roikes! Ghostbusters (GB) and Buffy the Vampire Slayer (BVS) were doing like-wise. 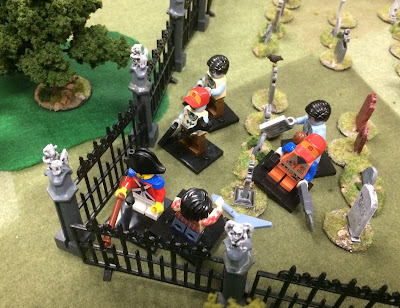 The four areas of perilous terrain gave everyone fits throughout the game. Above, we see Xander (BVS) trapped in the cemetery trying to rescue a costumed red-coat from a horde of Zeds.  In the end, the teen and Xander bite it, but Buffy returned to kick butt. 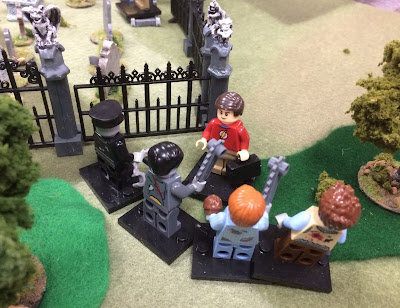 The BBT whisked the Trump teen away but left poor Sheldon to face down a horde by himself. He had amazingly lucky dodge and health check rolls and survived the game. Not like poor Raj... . 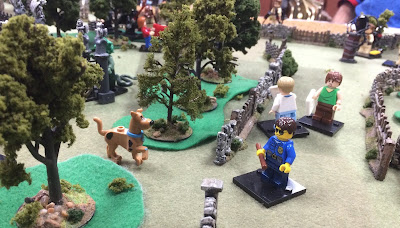 I didn't get a picture of it, but Giles (BVS) managed to debunk ghostbusting for two points. Both BVS and GBs spent a lot of time farming zombies for points (which opened up the board).

The SDG had lots of trouble taking down the fiendish cop as Scooby got scared (and Fred and Shaggy were useless). A Scooby snack eventually got him back in the game. 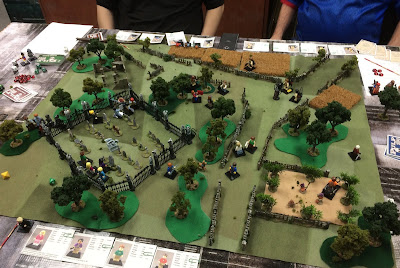 At about this point, there was one fiend left to find and most of the teens had been rescued. The unmasking of the fourth fiendish henchman saw the appearance of the the major plot point as Hitler/Gozer/BigBad/Old Man Corker stepped out of statue, revealing both Daphne and Wolowitz tied to a bomb. 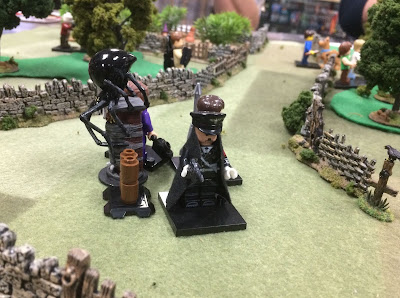 Then the race was on to with kill Hitler or rescue the hostages. Hitler's goal was to get off board but his own movement was slowed by his tiny legs (Stump-troopen, quipped Terry). Fortunately a motorcycle was dispatched to snatch him up. 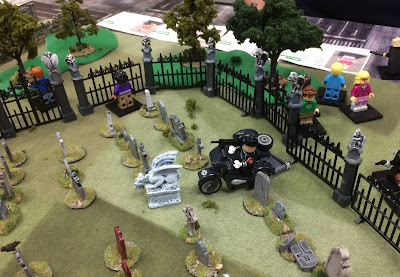 Unfortunately for Hitler (something I never thought I'd write), Buffy stuck a stick in the spokes and the motorcycle crashed. She then returned to laying a beating on the Gorgon. Meanwhile, Freddy snuck up behind her and successfully asked her out (winning a cunning roll), stunning her for a turn. 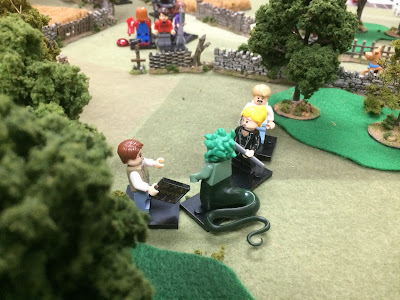 Back at Deadman's Curve, Hitler is fending off various shooting attacks. As the dice would have it, he was slowly being driven back towards the board edge he needed to exit off of. 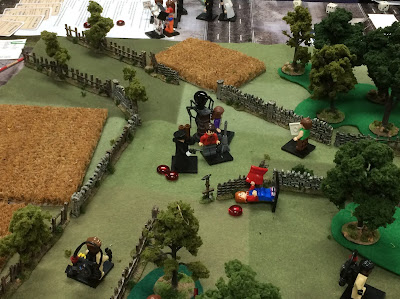 In the end, the SDG was able to pass the major plot point and rescued Daphne from the ticking bomb just as Hitler exited the board. This ended the game, about 20 minutes ahead of the 2-hour limit I had imposed. 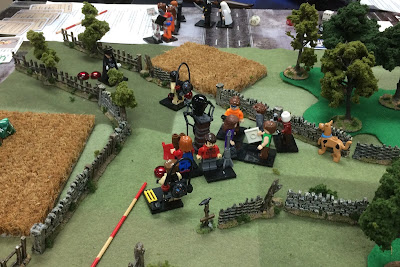 The teams counted up victory points and Terry (SDG) won with nine points. I think Bruce (GB) was next with 8 and Dan (BVS) was third with 7. Richard (BBT) came fourth (don't recall his total). Thanks Chen for stepping in to run the bad guys.

Overall, better than past pulp alley games. Smaller teams and a smaller board helped (as did whipping the players to keep the game moving). There was too much terrain (especially linear terrain) and not enough opportunity for the players to interact. But live and learn (or not, if you're Raj or Xander...).
at 5:00 AM

A fun and nice-looking game, Bob. The advantage of Lego mini-figures is that they're already "pre-painted" and are roughly 28mm, so fit in well with existing terrain. Plus you have a wide variety of charcters to choose from.

It was fun! Thanks for running it Bob. Though now I am curious as to just how much more of these figures you've been collecting?

CC: Good thing too as Lego terrain would be insanely expensive!

I have a fair number of these stashed away. The Beatles, Star Trek, and a bunch of Pirates--whenever I see a deal.

I love it! I'm not alone in wanting to use minifigs in gaming! I have nearly 700 minifigs in all sorts of genres and have been looking to use them in gaming since building Lego has over taken miniature painting as my hobby. Plus, many are cheaper than modern 25mm miniatures.

That looks and sounds great. I think we've had five players on a 3x3 table before, and it does force the players to get into things quickly.

I also think having gangs arrive at different points (rather than together) would create more opportunity to interact.

Thanks. It was fun.