Offspring activities meant I could not get out to the club this week, so no game reports. I did manage to get some painting done. 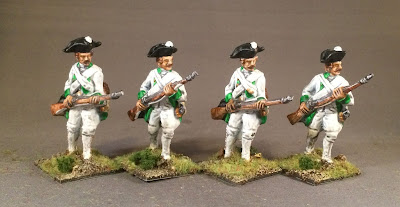 The arrival of more sprues of HaT 54mm Prussian SYW troops meant I could do some cutting to make light troops for the French (above) and Hessians (below). Cutting was mostly removing bayonets from muskets. In retrospect, maybe cutting down the hats would have also been an idea (such fiddly work, though).

Overall, the effect is good enough. Below there are two of the new plastic troops flanking one of the older metals I have from All The Kings' Men. Pretty decent match, especially since I had to guess at the paint mix for the jackets. 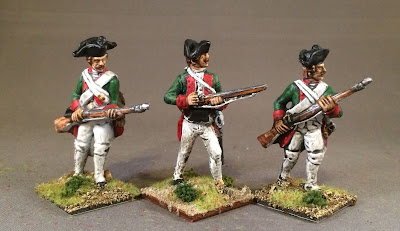 I also knocked off some of the terrain I bought at Red Claw the last time I was there. This is a set of bookshelves and cabinets. You can customize the inserts as you like to vary them (if you buy multiple sets). They look good enough for Buffy and Giles. 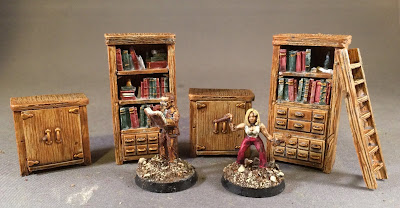 Up next: Well. some more zombie stuff and also some more 54mm AWI troops. I need to paint up some French marines (with colourful outfits) and then look at some French dragoons. The French expansion to Tricorne is due in late October.
at 5:00 AM