Bruce hosted another game of Lion Rampant. The scenario saw the troops in the foreground searching the terrain features for a lost noble (die roll for success with escalating chances). Once found, the noble had to be spirited off of the board. The other side (background) had to stop this foolishness. 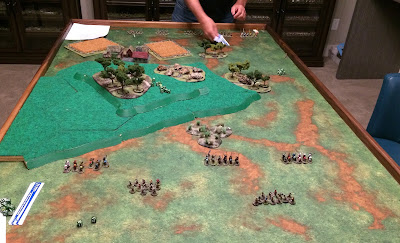 The early game saw lots of moving and searching. Good activation rolls on my part and a tough terrain set up for Bruce was much appreciated. My bleeding knights kept failing their activations, though! 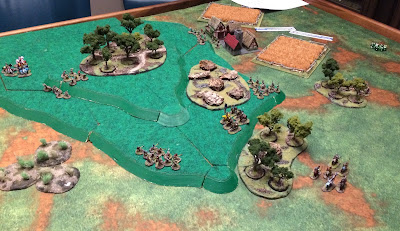 Eventually, the lost noble was found hiding in some trees by my crossbow unit (on left of photo above). This looks like an easy win for me as I just had to get him off the board (two moves to side or four moves to rear). 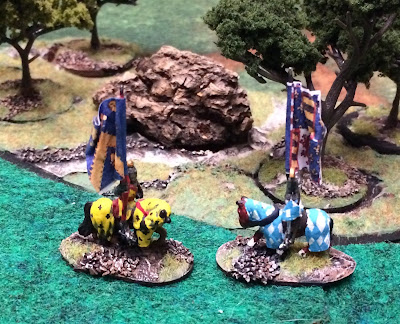 Bruce then challenged and killed my general. And this must have rattled the troops because I could not activate anything for several turns. Bruce took the opportunity to ride down my foot sergeants (jerk!). 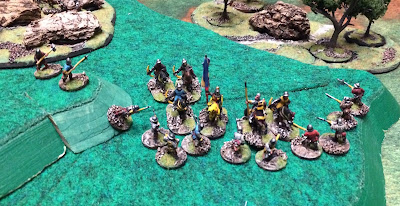 Then the chase was on. I fell back, hoping to draw his forces onto the two units of knights that never really got going and triggering an impetuous charge. This tactic did in fact work, which was good because my crossbow unit was unable to retreat effectively. 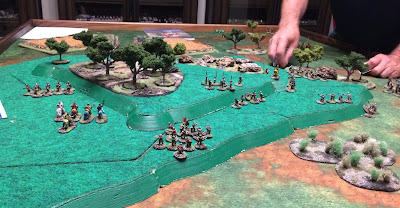 Eventually things turned around and I managed to get both of knight units in positions where they just kept charging his pursuers and my crossbow guys got away with the noble. An ugly, ugly 7-5 win for the good guys. 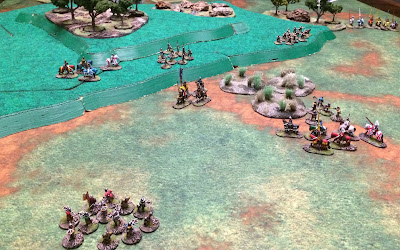 We played a second game with the same units but objectives reversed. Bruce found the noble on his first try and got him of the board before my guys could even sight his units (a 5-0 win!). Overall, a fun scenario.
at 5:00 AM