I popped over to Bruce's for a game of Vikings 878 on Tuesday. We'd tried this at the club a few months back but I was keen for a second go. Bruce took the role of the blood-thirty invaders. 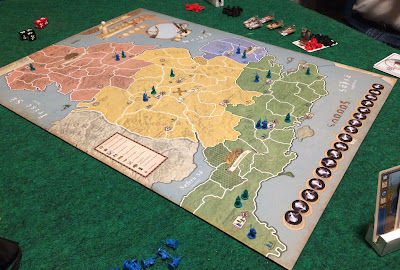 His first move was to land at London (which makes sense, given the map). He scored it and part of Kent early on. 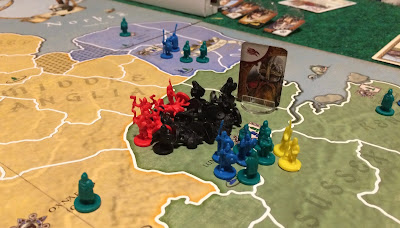 I then pushed him back to the shores. My goal was to limit his space to expand (which complicates the defence a lot). His dice were notably bad and mine were hot. I'm not sure containment would be viable without the favour of the dice gods.

Bruce pushed against inland and also landed in the north. My dice were good enough that, by this time, I had all of my green troops on the board and most of my blue available. That makes it hard to the viking to capture my reinforcement points and also less useful strategically. 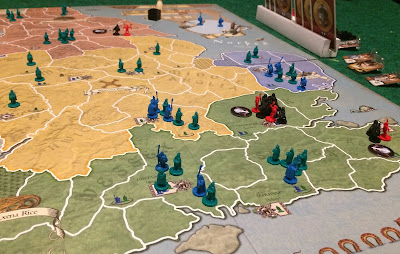 The tide swung back against the vikings and, shortly after the pic below was snapped, they were eliminated from the island. 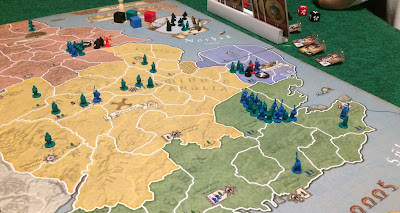 Fortunately for Bruce, he had last go in this round and managed to land a sizeable force in the north to stay in the game. But we were in the second half and one of my truce cards had already been played (no sign of the other truce card, though). 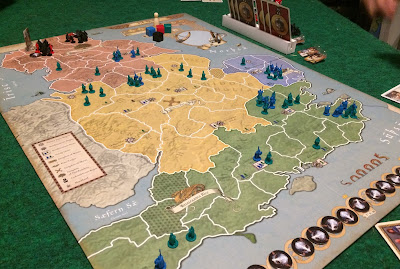 Bruce pushed south but just had terrible luck in combat. There was literally nothing to be done. He had good strategies but even my Fyrd proved worthy opponents for his beardos. 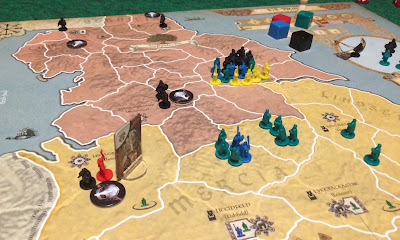 We called the game at this point as there was no reasonable prospect of viking victory. An odd result. Some nice mechanics still--the Fyrd are a lovely way to simulate a local defence factor but include a random element. Same with the viking reinforcement card draws.
at 8:46 AM