Bruce brought out a game of Pulp Alley and some cowboys to the club this week. The terrain is all new paper terrain he has been building. Overall, a nice little set-up that nests in one box.

The objective was for Player 1 to come on in the bottom middle of the photo above, move to the top of the photo, break a guy out of jail and then get off either of the lower board edges. Players 2 and 3 converged on him from the left and right while reinforcements for Player 1 entered on the bottom of the board. 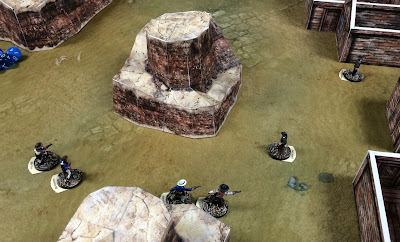 For the first six turns of the game, only Player 1 is on the board. He has to pass a plot point each turn (which slows movement) and also avoid randomly wandering clergymen who are on the look out (and are perilous). When Player 1 kills a clergy or at the start of turn 6, the other players arrive. 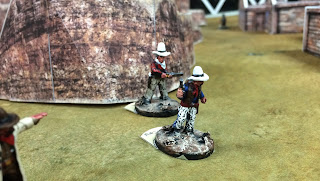 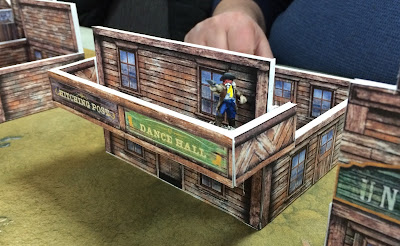 Game 1 saw Player 1 get to the jail fast then make a break down mainstream, while taking fire from various marshals in buildings. 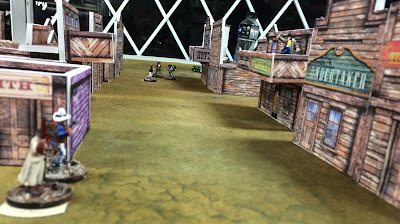 It was a close run victory for player 1. 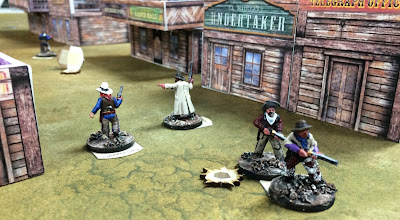 We then re-set the board and switched roles. In game 2, Player 1 struggled with both completing perils each turn and with the rabbi and lost a character (and time) getting to the jail. 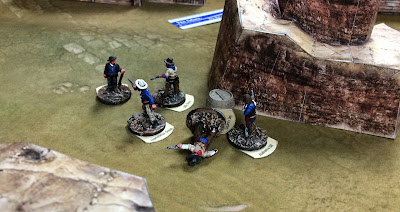 Player 1 then decided to head for the hills and came under fire from various marshals. Time started to run out and it came down to a canyon shoot out. 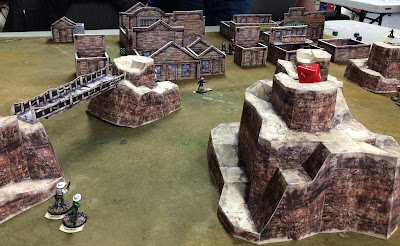 Here, the prisoner was recaptured and Player 1 conceded he was out of time. Overall, a neat scenario nicked from Vice Alley, I think. Pulp Alley did a good job of dealing with cowboys. 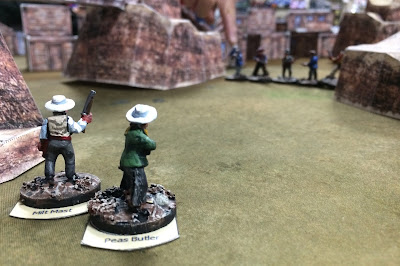 Next time we'll see how it comes forward in time during a Santa-themed holiday game set in modern times that I'll be running.
at 5:00 AM