I dropped in on Bruce last night to give GMT's re-release of We The People (called Washington's War) a quick play through. This board game allows you to replay the entirety of the American War of Independence. It addresses both the political and military facets of the conflict and was the first card-driven board game when it came out. 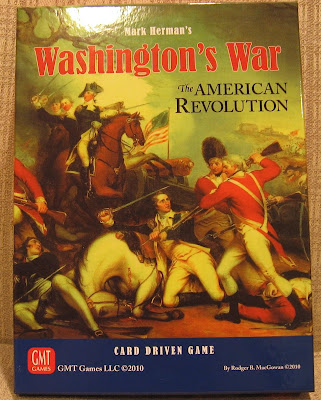 The production values are high, with a nice mounted board, colour rule books and nice counters and cards. The core of the original game also remains with the changes appearing to focus on combat (competitive die roll) and accentuating the asymmetry between the British and American forces. 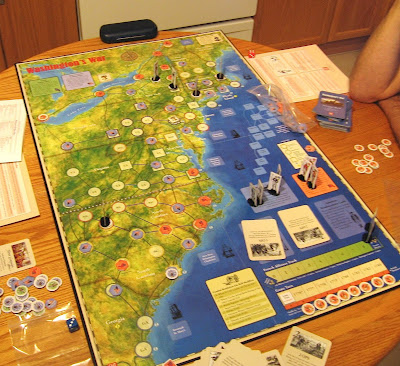 This is the board after turn one (1775) and relatively little has happened. The American player has focused on gaining political control in the south and confining the British to the coast. This is important because, when the game ends (driven by the cards), what matters is who controls the most states. 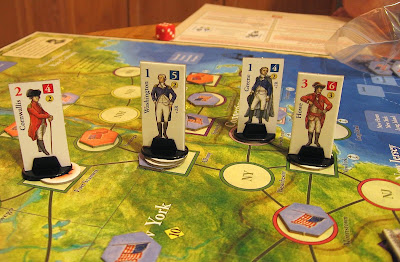 Here we see a close-up of the armies in year 1 stomping about the Hudson River basin, each led by a famous general. As the game progresses, the American must maintain control of states and nibble away at the British control while only giving battle when necessary. This reflects that winter attrition diminishes American forces by half (excepting the core of the continental army). This gives a significantly different feel to the game than the original.

Our game saw the British move about the middle of the board trying (successfully) to split the colonies, while the Americans played the edges, trying to have enough states at the end of the game to win. Some good tactics by the Brit and an extension of the war to 1781 meant the end was a narrow British win (both sides met their victory conditions so the Brits won by default). This happened Just as the French entered the war on the American side and Congress belatedly issued the Declaration of Independence. Here is the board at game end with armies removed. 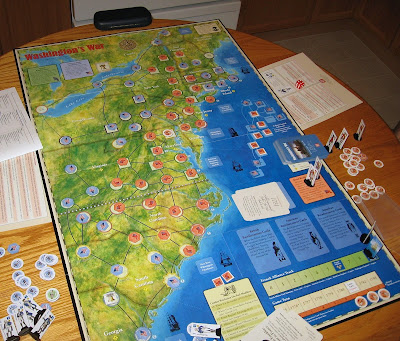 Overall, this was an interesting revision to the game. I think our own inexperience affected the game play. In the past, we have both been quite bloody minded and fought a lot. The rules change meant we were both more cautious and focused on the area-control aspect of the political game. A bit more balanced strategy would have resulted in a different game. So too would an American strategy of keeping Washington in the middle states where he could pose a credible threat to the British armies.

Overall, a good modeling of the complexities and limitations of both sides during the war. There were relatively few important battles but they were very important, including a British army surrendering in the NE (shades of Saratoga). This revision would still work well as a driver of miniature games to resolve table top battles, as Bruce and I examined in our article in Battlegames 20 (or 21?) on using AWI boardgames as campaign mechanics.

Great news. I'll put this on my wish list. I've been trying to get an out of print copy of the original for a while, but unwilling to pay the over $100 it goes for. Glad they reprinted it.

Having played GMT's Wellington, this looks in the same vein. Just might have to pick this up.

Yes, We The People became really pricey there for awhile! This is a nice reprint with some nice additional nuances to it.