I finished basing up some American militia for the War of 1812. These are 1/76 Airfix figures from their Confederate Infantry set (ACW). I believe this set was sculpted in about 1962 (doubtlessly these are a more recent casting). The level of detail is surprising giving the age of the set.

I did two bases in a firing pose, selecting the floppy hat fellows from the job lot provided me by Dave Parker. 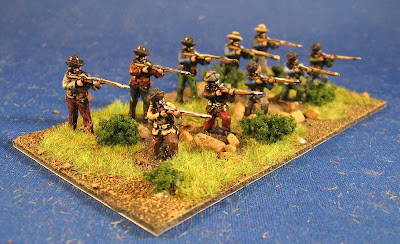 You can see a bit more detail here. These fellows are designed to look like a motley collection of southerners who headed north to glory. I went with a slightly deeper base and looser firing line than I will with regulars--reflecting the lack of discipline among militia. A third base (not pictured) has fellows advancing.

I also painted up one unit with a more uniform appearance, perhaps being a slightly higher grade of militia. It is hard to find much info on what these fellow wore so I made some guesses about brown being a popular colour. 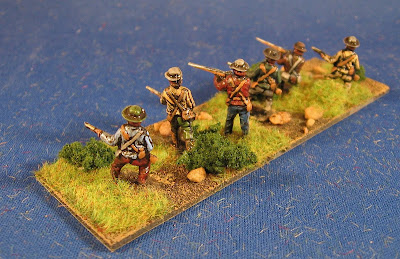 Finally, there were enough figures left over to do a base of skirmishers--perhaps scouts for the main body. 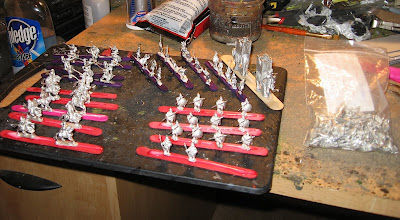 Up next are two 15mm DBA armies, You can see the later Carthaginian army on paint sticks and beside it in a bag its Roman counterpart (Polybian, I think).
at 5:52 PM