Bruce and I continued our email Cold War gone hot gaming using modified Scharnhorst for the map game and modified Rommel for the table top. This game was a Soviet (blue, moving first) v Chinese (red) conflict somewhere in Mongolia. 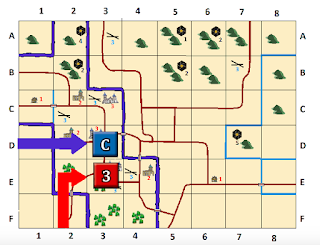 Bruce made two changes to Scharnhorst for this game to see how they played. First, there were three kinds of objectives for which each side secretly diced: infrastructure (1-3), resources (4-5), and population centres (6). The Chinese got infrastructure (airbases on the map) and the Soviets got population centres (cities son the map). This idea was to generate some uncertainty in the map game (rather than just a rush to bag common objectives).

Second, the side with the recon advantage got to choose its side (Russians chose west). But the other player could choose any of the three remaining sides (Chinese chose south). The idea was to reduce the power for the recon advantage (where you choose your own side and, de facto, the other guy's side) as well as to (if adjacent sits were chosen) open the possibility of a static front and more open, cavalry-style play on the rest of the map.

I would say the multiple types of objectives was a success. Choosing a side was maybe less so? Hard to know after one play. Anyhow, the open phases saw a concentration of units in the SW corner of the map. 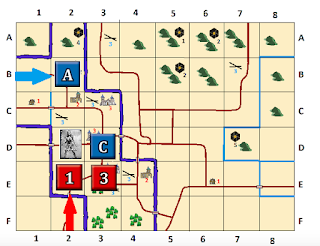 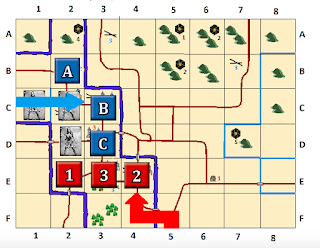 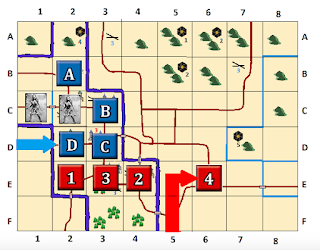 At the beginning of Day 2, I declared a battle and structure the field to advantage myself (basically all of my units were in columns D and C and I bet that Bruce had made a more balanced allocation). Given the numerical superiority of the Chinese, I wanted to fight only half his force at a time with all of mine if I could manage it. 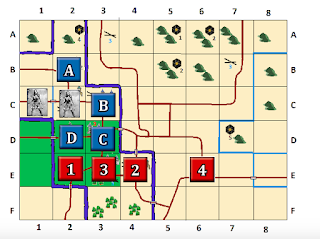 There was some last minute map moves (I tried to deny him an airfield, having guessed his objectives) but he needed to swing his troops in as reinforcements. 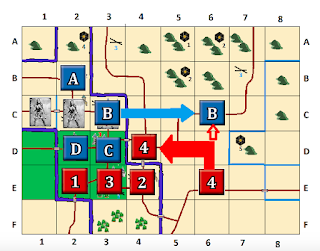 At the end of the map phase, the Soviets has 11 points and the Chinese had 5. There were enough points on play on the map (plus 1d6 of points for a tactical win) that victory hung in the balance.
We then deployed. The Soviet plant as to sweep south and clean out the Chinese foot troops and then move east to and destroy the rest of the Chinese before reinforcements arrived. The Chinese plan was to sit tight except on the far eastern edge of the board were they would, if possible, try to grab some victory points. 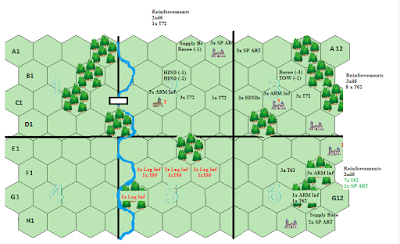 Turn 1 saw an aggressive Soviet advance supported by helos and artillery. The helos came and went over the course of the game (which was a bit of work to track) and, in the end, the Soviet artillery probably made the differences. (A couple of units are missing on the board as I lost their chips--I just wrote them on the map itself). 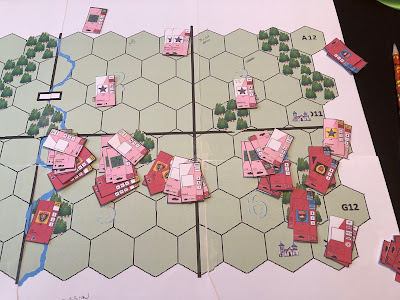 The Soviet attack was damaging but but short lived as bad dice meant Chinese units survived causing the Soviets to tip. The Chinese foot in the middle of the board were badly damaged but irritatingly still there. The Chinese regrouped in turn 2 but their one attack in Hex E11 was a bust. 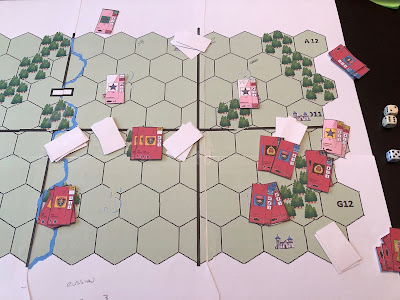 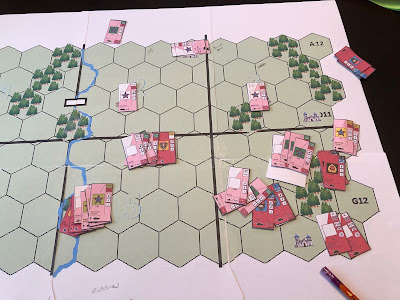 On Turn 4, the Chinese attempted to regain the supply base but their air strike did not come through and a barrage further disrupt their attack. 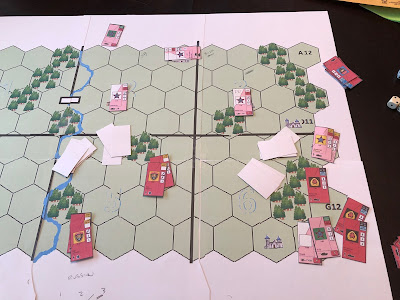 Chinese reinforcements did arrive (a horde of T-62s/Type 70s). But they were bottled up by all of the traffic on the eastern edge of the map. On Turn 5, the Russians used a wave attack to clean up the foot and pulse across the board to the east. While the Soviet attacks were not fantastically effective, they were enough to blunt the reinforcements' combat strength. 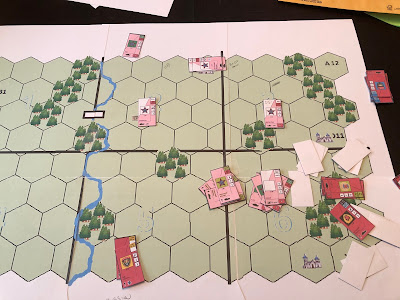 The Chinese used their reinforcements to attack the Soviets but could not inflict enough casualties to turn the tide on Turn 6. 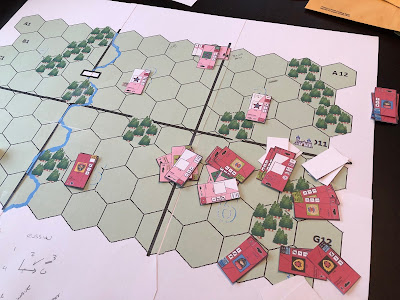 Turn 7 saw a swarm of helos and a rain of shells contain the attempted breakout. 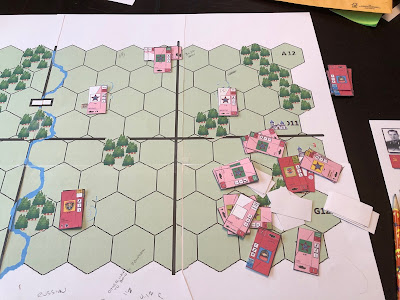 Turn 8 saw a last push to recapture the Chinese Supply base but the Chinese units were just too attritted to make much of an attack. The second wave of Chinese reinforcements did not arrive. 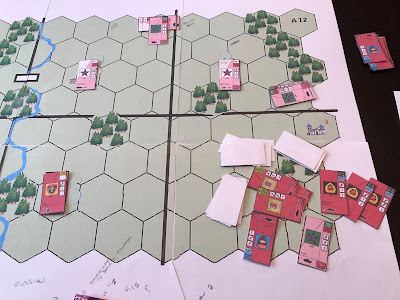 Turn 9 saw the Soviets redeploy to bottle up the eastern edge against any further Chinese reinforcements and clean up the remainder of the Chinese units on the SE corner. 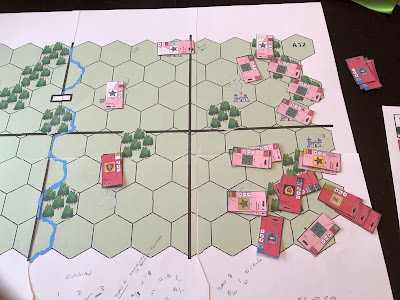 I called the game at this point because the Chinese could not win (even if the reinforcements showed up). After the tabletop battle, victory points were 15 to 2 for the Soviets for a convincing win.
at 4:00 AM