Bruce graciously put on a game of Man of War, hauling out his lovely collection of GHQ ships. This is a very slick system with movement triggered by one's speed (the faster you go, the more times you move in a turn--akin to the activation system in the old fighter-plane game Mustangs). Movement is interspersed with five shared firing phases. So the challenge is to maneuver so you can take advantage of (and not be screwed by...) the occurrence of the firing opportunity. I imagine Bruce has tweaked the rules some but I can't recall what the tweaks were. 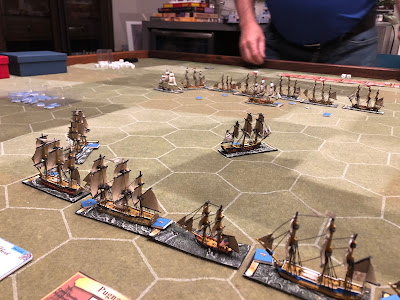 Our scenario was a smaller but better quality French fleet (foreground) having the wind gauge on a British fleet (background). The wind is running left to right across the picture above and is abeam the one French ship that is cutting hard to the right all on its own. In my mind, I call this game "oh shit, the wind shifted" and this was no exception 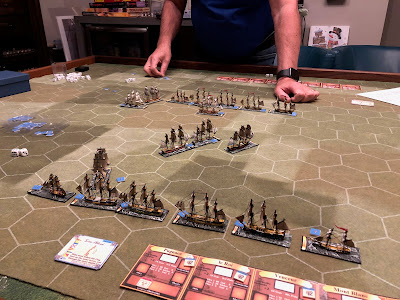 So we get get moving and the second turn I roll a wind change in direction (it is now coming from the right, angling along the hex grain to the left) and it has dramatically weakened. This is a very unlikely event. Bruce has just turned his fleet to try and take the wind gauge away from me and this change basically catches him in irons, partly becalmed, and creates a major traffic jam (basically, he is now screwed). Despite my sympathy for his situation. I am proceeding to take full advantage. 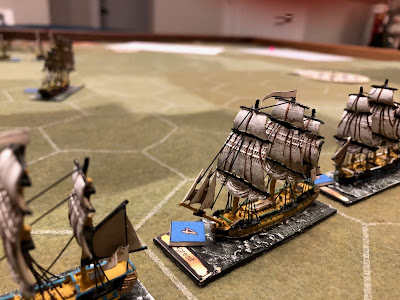 Picture above of pretty ships with a speed counter on in. Speed ranges 0-7 hexes per turn--speed 4 for a big ship is pretty fast. 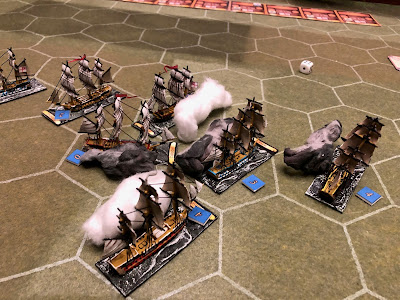 I manage to get a group of ships around the end of his line an start doing rear rakes. Some lucky rolls and he has two ships awash. My effort to board isn't successful, however. 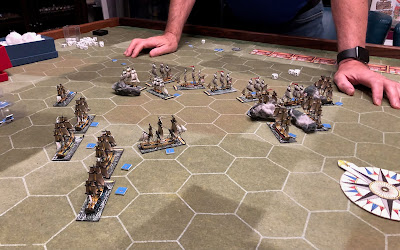 Over on the left, I'm trying to get ships around the front for more rakes and put him in a box. The wind has just left him with no good options except to fight it out until he can get turned around and run. 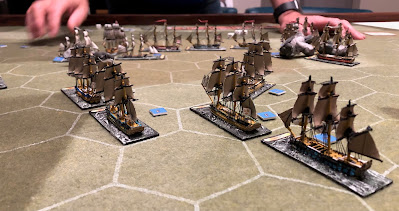 In the end, one of his awash ships strikes it colours and that causes a cascading morale failure (a second seton unlucky dice for Bruce) and his fleet breaks contact. Probably a pretty decisive (and lucky) victory for the French. 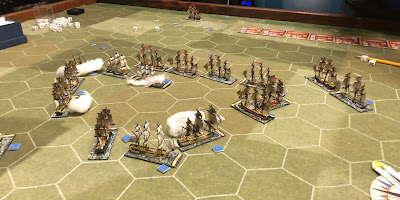 Overall, one of the better sets of rules. Maneuver is slow and grinding, wind position and crew quality really matter, unusual things (like boarding actions) are risky and unlikely to occur. The mechanics create command and control limits that seem realistic while still giving players some difficult choices around movement and combat. The firing mechanic (basically, if you fire now, you have to skip the next firing phase to reload that side), in particular, make for tough choices.

Up next: A different era of naval operations.