Alright, this is the last of the rebel foot from Star Wars Legion. Another squad in brown but with Luke in Bespin garb.

I went with dun-coloured shirts instead of blue so this squad could be differentiated from last week's, but could also still be combined. 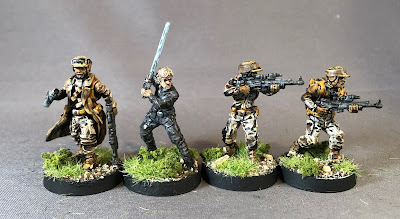 Up next: Some AT-RTs and then may some Crimea War figures?
at 4:00 AM