I was looking for some female characters to add to my pulp/sci-fi collection. A challenge is finding female poses that are not either sex workers or wearing chainmail bikinis. 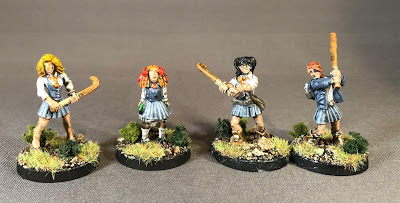 Crooked Dice has a nice set of school girls holding sports equipment so I bought some. Overall, great figures except the faces lack definition.

What I like about these figures are their versatility. Are they a modern sports team caught in the apocalypse, battling zombies or neo-Nazis? Note the small tears in some of the clothes. I played this up by dirtying the clothes with washes. 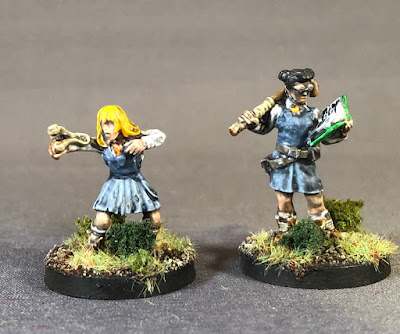 Or are they a street gang from the 20s or 30s, protecting their neighbourhood from gangsters and lizard people? Or are they a bunch of Slayers, activated early to help Buffy close the Hellmouth? 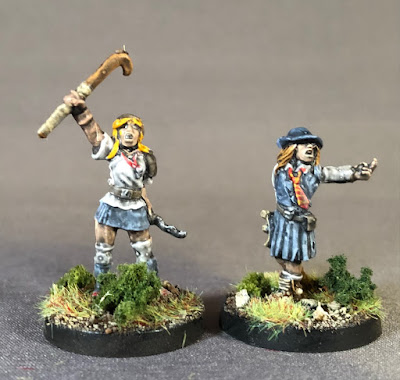 The figure above on the right is either summoning someone closer or making a rude gesture, but with two fingers. I was pretty happy with the colour palette I chose and thrilled to not be painting tartan. 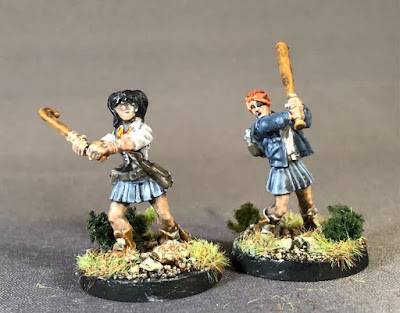 There is quite a range in ages in this set. The figures below seem to include a teacher (left) and a very young pupil (right). The red head is holding what I think is a lollipop but I painted it as a ping-pong paddle. A tiny bit more depth on the faces would have been useful for the washes to catch on. 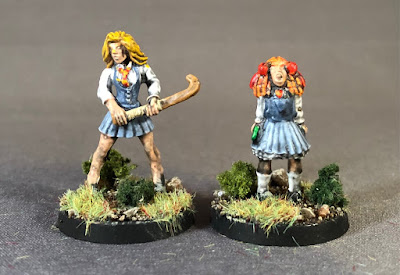 There is some very nice detail on the backs of the figures, including the teddy bear and someone's go-bag. The field hockey player has both some cobbled together armour and a wicked-looking knife (perhaps field hockey has changed since I was in school?). 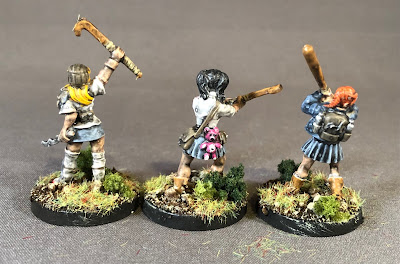 Up next: Probably some 6mm and maybe also some more sci-fi.
at 4:00 AM

Fab work. These are some of my favourite Crooked Dice models.