A few weeks back, I played War at Sea (CMG) at the club and thought that the rules could be easily adapted for Star trek. I've been looking for a set of rules to play with the tiny Trek ships I bought a few years ago. 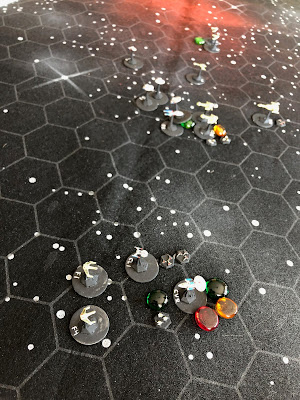 I basically ported the rules across with almost no changes (dropping torpedoes and CAP and increasing the stacking to three) and hauled it all to Bruce's for a couple of play tests. 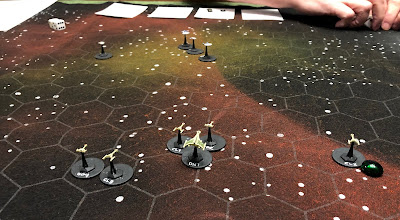 Other than a couple of extra additions (fighter range of 12 and a cloaking mechanic), it seemed to work well as a fleet-level game. I think it could easily take four players and two or three dozen ships. You are clearly fighting two fleets, not a bunch of individual ships.

The game also plays fast enough that one could play a set of three linked scenarios in a single night. Maybe a small encounter game to learn the rules, a convoy scenario, and then a big battle. 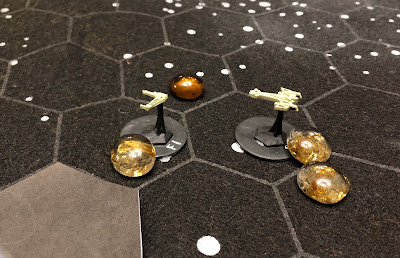 I was happy to get these very small ships out (the hexes are two inches across) and I ordered from Cardassian and Dominion fleets to add some variety. 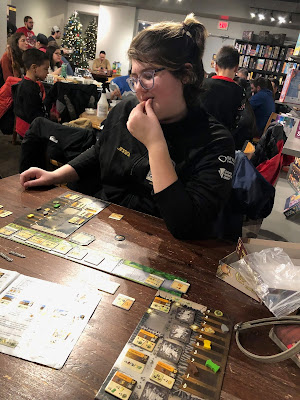 Jess and I also visited a local gaming cafe and plodded through some kind of dwarf mining game (Cave versus Cave?). I had a good time but the place was packed and so loud we could hardly hear ourselves.
at 5:00 AM