The Battle of Pork Rind

I ran a game of Rebels and Patriots at the club: The Battle of Pork Rind. This is a War of 1812 scenario based around the Yanks capturing a British supply base. The base is mid-table and there are four loot token for the Americans to win. The British are outgunned but set up well and can bring on some reinforcements. 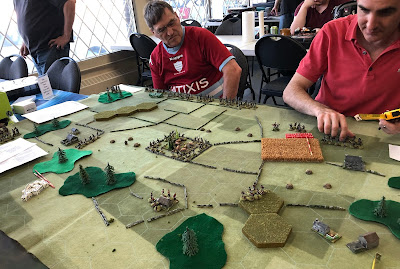 Andy (right above) declared for King while Bruce and Scott played for Congress. The Americans came on the board quickly and pushed the British pickets back. 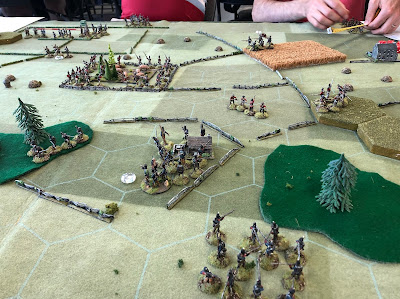 Andy had amazing activation rolls and was able to bring on his reinforcements early. This include the Indian Allies I had painted up earlier in the day (still a bit wet on the bases!). These I pointed out as aggressive so they melee on 4+ (I mention this because it becomes important). 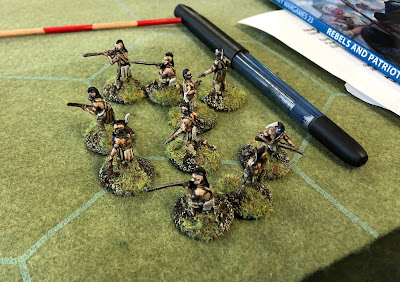 The American advance was steady from Bruce's side of the board while Scott struggled with his activation rolls. I can't tell you how happy I am to have finally gotten the British camp onto the table. I painted it 7 (?) years ago! 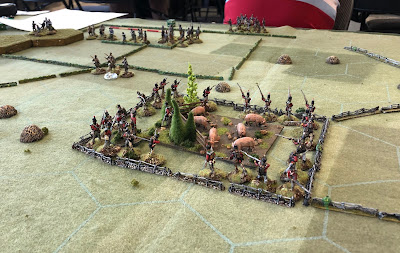 Bruce eventually worked his cavalry into position to rush the supply base and did so dramatically! The British never really recovered from that set back, although they did rout the cavalry shortly thereafter. 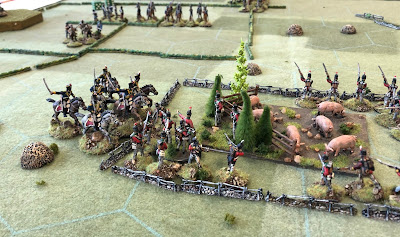 At about the same time, Andy got his Indian allies into position to melee Scott's stalled troops. 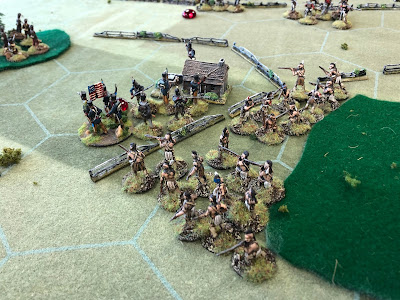 These fellows must have been from the Lawnmower Tribe because they chewed through five of Scott's units before finally being whittled down. The 4+ melee coupled with good (Andy) and bad (Scott) rolls were shocking. Scott was close to the break point for his troops. 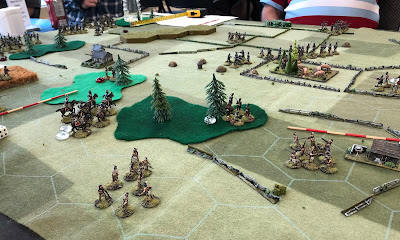 However, Andy's activation rolls got bad and Bruce pressed forward this attack and eventually the British just ran out of bodies to throw at them. Overall, a solid American win and we only played one rule incorrectly (when units routed they should have caused a morale check around them). 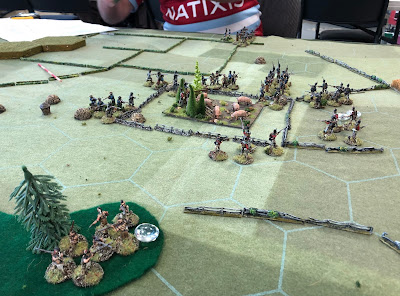 The rest of the gang played Escape from Dulce. Basically a sci-fi escape game. Very cool minis but I've no sense of the mechanics. 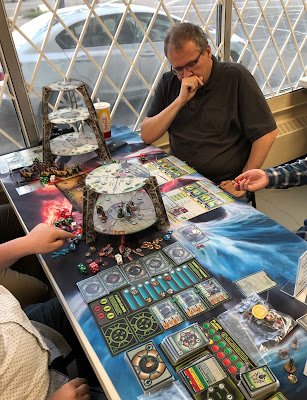 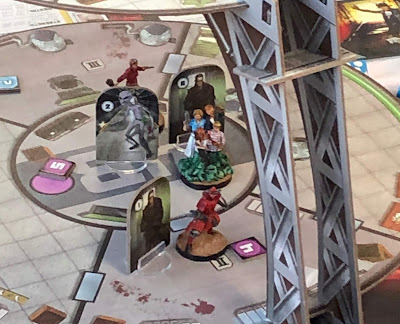 Overall, a good club night. Nice turn out and good games.
at 5:00 AM

Great looking game, and it sounds like you had fun! I was admiring your pigs (which, I believe, is the first time I've written that sentence), and wondered who makes them?

Thanks! These are from the Imex "Pioneers" set (also has cows and settlement-era civilians).