Bruce and I paused out game of LaSalle a few weeks back. We finally finished it off last week. When we last left our heroes, the British (bottom of picture below) held the town on the hill, were swinging a left hook, and were rushing to block a flanking attack on their right. 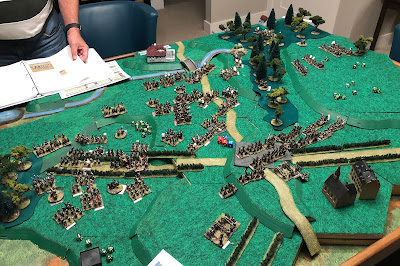 The British right managed to get into position and, eventually, put the advancing French in a nasty box. This took awhile to develop but the Brits had this side in hand. 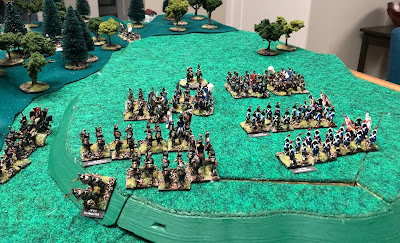 Over on the left (below), there was some early success for the Brits in cleaning out some cannon. Then they basically lost ever single melee for the rest of the game due to hilariously awful dice. It was crazy to watch units evaporate for no good reason. This side was going French, with only a lack of troops preventing a complete rolling up of the flank. 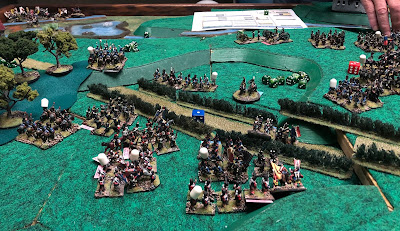 In the middle, again the Brits could not melee worth beans and the French kept advancing. Some lucky shooting kept them off the hill (automatic victory). 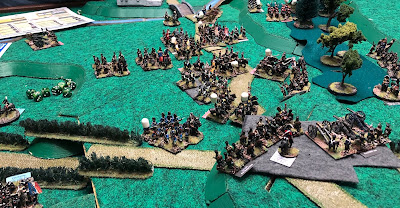 As night fell, the British squeaked out the thinnest of tactical victories based entirely on the casualties inflicted on the first night. One more round at the French would have had things. (Whew!). 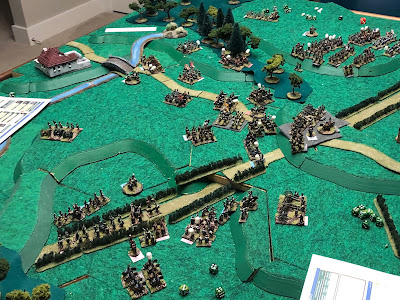 No great observations beyond the rules are very slick and combined arms is hard to counter with anything other than combined arms.
at 5:00 AM