I finished up a few more figures this week. First up were some more Horrorclix figs. These include a scarecrow, two terrifying clowns, a lizard in a lab coat and a child surrounded by flames.

The scarecrow was a very mice figure and much better sculpted than the Batman Scarecrow that I have. 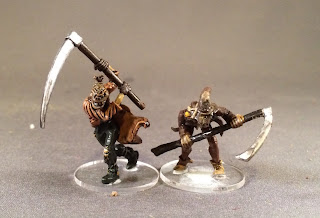 I also finished up a stray zombie and three Creatures from the Black Lagoon.

I then got back to some of the teeny Trek ships I bought this summer from Shapeways. These are hard to both paint and photograph.

The bases they are on are about 20mm across. I put in a 28mm figure for scale. I think I am doing a creditable job given the size! Only another 20 to go. Then some Klingons... . 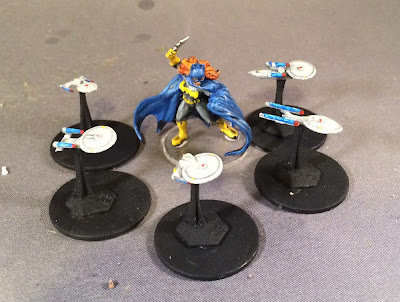 Up next: I have a fair bit of gaming to catch up on and I'm painting some more 28mm buildings.
at 5:00 AM