Bruce and I continued our Aureleian campaign this week with the first large battle between the dastardly Romans and the British freedom fighters.

Bruce had 10 turns to march across the board and seize two objectives. I managed to drop some nasty terrain (light green oval) in his way early on. I then moved to try and jam up his legions in bad terrain. Tactically this was right (bad terrain levels the playing field for the Brits) but strategically this was an error (burned too many cards). 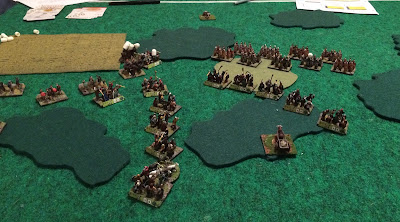 I knew I was in real card trouble just about the moment when the armies collided. The first skirmishes were pretty indecisive. 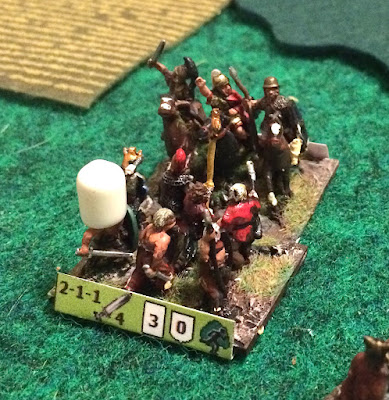 Then this started to happen.... 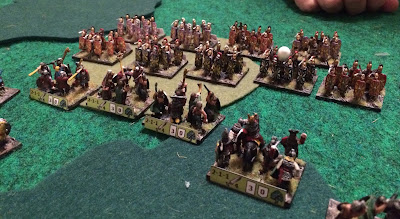 ...and now everyone has party hats and I'm low on cards and Bruce is also working horse around my flank. 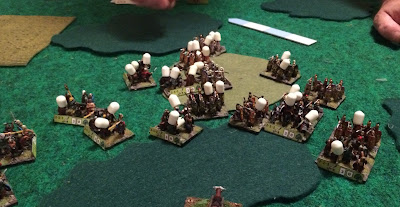 I tried a hail Mary attack to run him out of cards through unit loss but he had a special card that negated the flank benefits for one turn and that was all she wrote. I should have just waited him out. 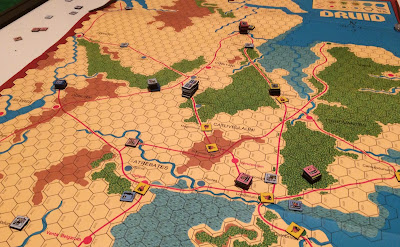 We then returned to Druid to move the campaign along We played another 5 turns (so we're 50% of the way done). Bruce has supply problems but I have not rallied enough tribes. We stopped when we got another big battle result and we'll game that out.
at 6:35 AM