Between kids soccer and the yard, the painting table has not seen much action. I did, however, get two games of Victory in Europe in with Bruce. The first game we played the 1939 scenario. Germany made a two pronged attack on France, feinting into the Netherlands and then punching through the Maginot Line and capturing Paris on an exploitation. This knocked France of the game

Things bogged down a bit in the desert and Poland, but a lucky diplomacy role brought Turkey in on the German side. Had The Russian block in Baku not been obscuring the production points, the German player would have pushed into souther Russia, hurting the Russian production and radically extending the Russian frontage. We called it in early 1941 with the Germans readying to attack Russian.

We also tried the 1944 scenario. A western landing in France was successful. Second landing was pushed back but the cost to the Germans was high and France quickly rolled over. The German played then abandoned Italy to shore up his defense. 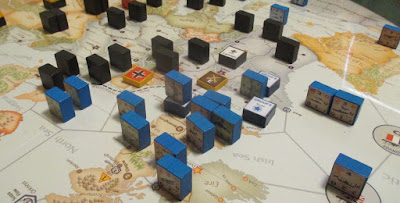 In the east, an aggressive German attack in 1944 cost a lot of units and the Russians managed to push forward to seize Berlin (again, on an exploitation attack). Lucky dice helped and it was game over for the Germans in early 1945.

This system is pretty slick and gives 1945-quarterbacks an opportunity to try their master plan to win the war. What I keep being struck by is how any deviation from the historical has many unexpected consequences. Focus on France in 1939? Then the damned Russians gobble Poland and you have that much further to push them back plus a major headache shuttling troops. Arrgh.
at 5:00 AM