Gardening has slowed my painting some these past week but happily I'm too crippled by stiffness tonight to go back out and cut more hedge so I completed some 28mm HYW English. This is the matching army to my Medieval French.

I did three bases in the king's livery. These are Perry figures from their English bill&bow box. The figures are lovely although it has taken me a few misfires before I've go the hang of assembling them. Consequently, there are a few hunchbacks with mismatched sleeves hiding in this lot. 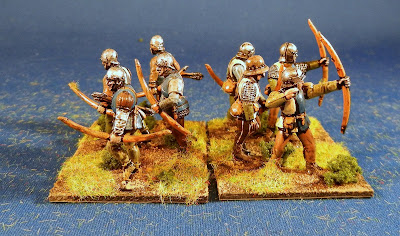 I switched painting styles to a block and wash approach. Overall, I'm happy with the results given the effort (almost none) required. I will spend a bit more time in the next batch (four bases of blades) detailing the clothing a bit more. I also did three bases as levies brought along by other nobles with a mix of livery and slightly less mail.

Up next: I have the rest of the HYW army assembled and primered (mix of Perry, GW Bretonnians and some mystery figs from a trade) so I think I will push on to finish these. In the meantime, I have done some character bases for my daughter's Star Wars HoTT armies and they are drying. But the next week or so will entail club night and then scrambling to bring together two games for MayDay. I also expect to take receipt of some 28mm Norman foot which will queue after the medieval English.
at 7:21 PM

Bob, you set a blistering pace! Gardening or otherwise!!!

Quantity has a quality all of its own!