Now that you have painted your 1/72-scale figures, the next (and last!) step is to base them. This tutorial is designed to provide a step-by-step approach that is easy and quick to learn for new painters and gives a decent result. 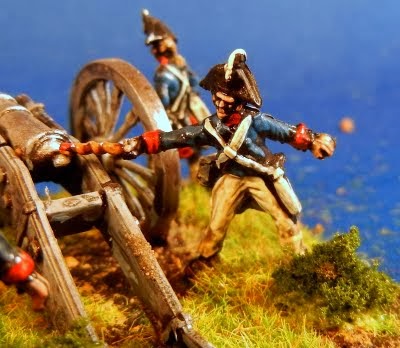 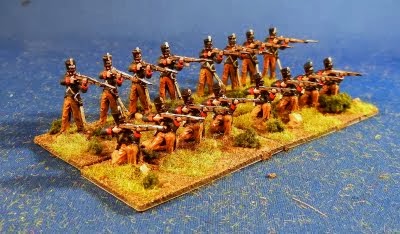 There are two main approaches to basing figures: individually or as a group. Over time, I've come to prefer individual basing because it is more flexible for gaming. This reflects that each rule system seems to have its own basing conventions and individually based figures can be placed on an appropriately sized sabot. That said, figures based as a group often look nicer. The instructions below address both approaches.

Materials: For individual figures I use metal fender washers because metal allows me to use magnetic sabots when I need to create a specific sized base (see below). For group-basing, I use thick vinyl floor tile. It is sticky on one side and can be scored and snapped to the correct dimensions.

Preparation: For metal washers, I spray prime them black. For vinyl floor tile, I use a pencil and ruler to draw out the correct dimension on the tile. I then score the tile with a knife and ruler and then snap the tile into pieces. 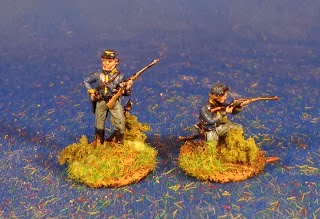 Attaching figures: For metal washers, I use Loctite's gel superglue to attach the figures to the washer. For vinyl floor tiles, I peel the paper back off and use the adhesive on the tile to hold the figures down. From here on out, the basing approach is the same for individually and group-based figures.

Sanding: I spread a thin coat of white glue (often called PVA) on the base right up to the figures ankles. Then I spread some coarse sand on the based. I often mixed some very tiny pebbles in with the sand. After sanding, I tip each base to the side and gently tap the excess sand off back into my tub of sand. The result is a rough ground effect. 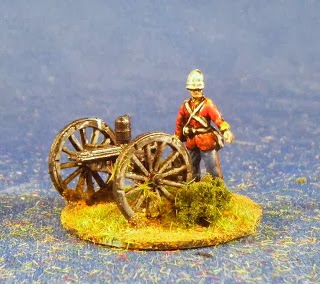 Sealing: Once the glue holding the sand on has dried, I then seal the base (so the sand stays on) with Future floor wax (now sold as Pledge Klear with Future). This also darkens the sand.

Drybrushing: Once the Future has dried, I then take some tan paint and dry brush the base to create a highlight. To dry brush, I take a square-tip brush, dip it into the paint and then wipe it on a cloth so there is very little paint left on the brush. This brush is then dragged lightly over the top of the sand so paint is deposited only on the high spots (see below). 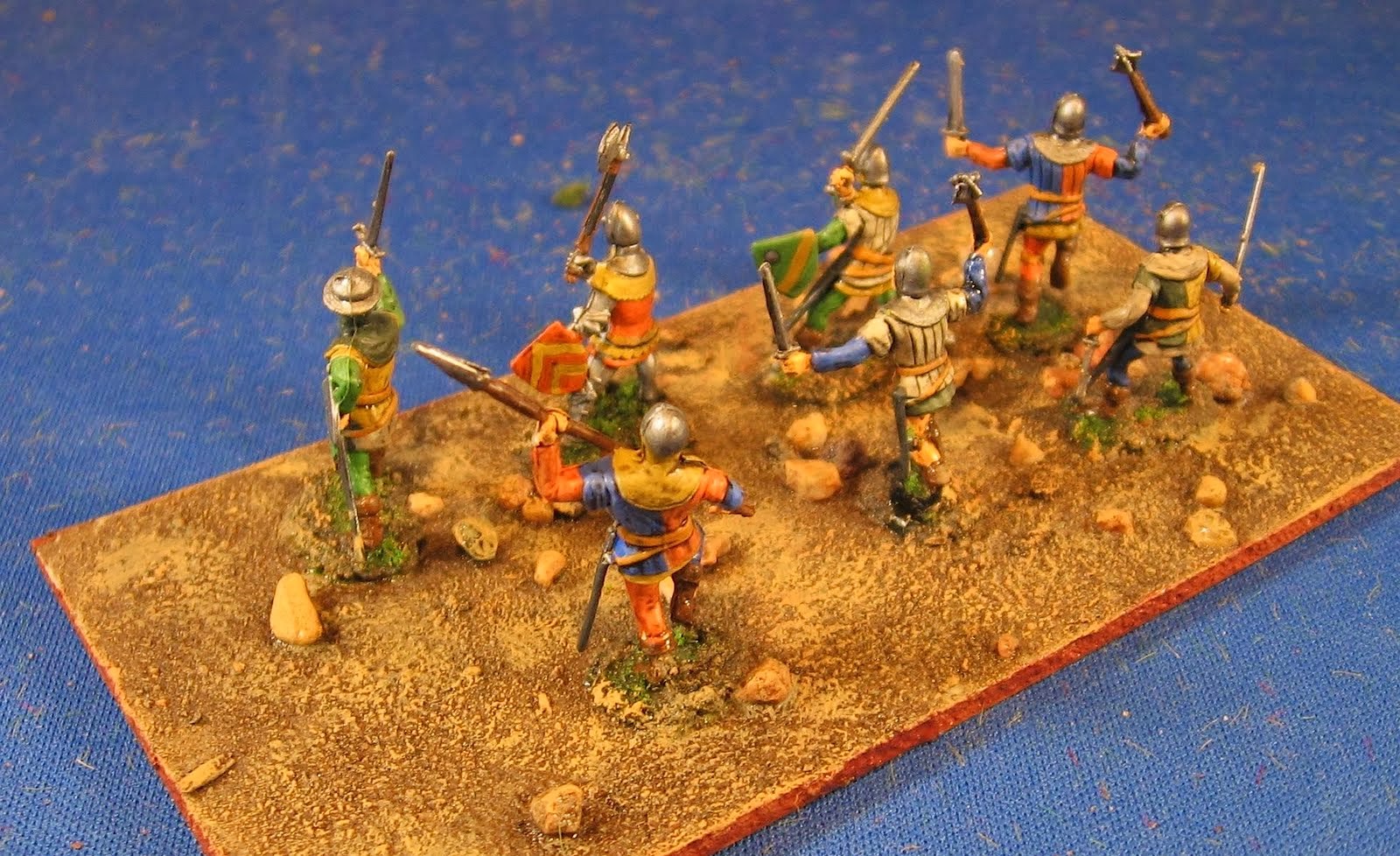 Flocking: To finish off the base, I again apply some white glue to the base (usually with an old brush) where I want there to be grass. I try to leave about 50% of a base as "dirt" as few battles are fought on putting greens. Once the glue is on, I spread static grass, tip the base off and knock the bottom to remove any excess. 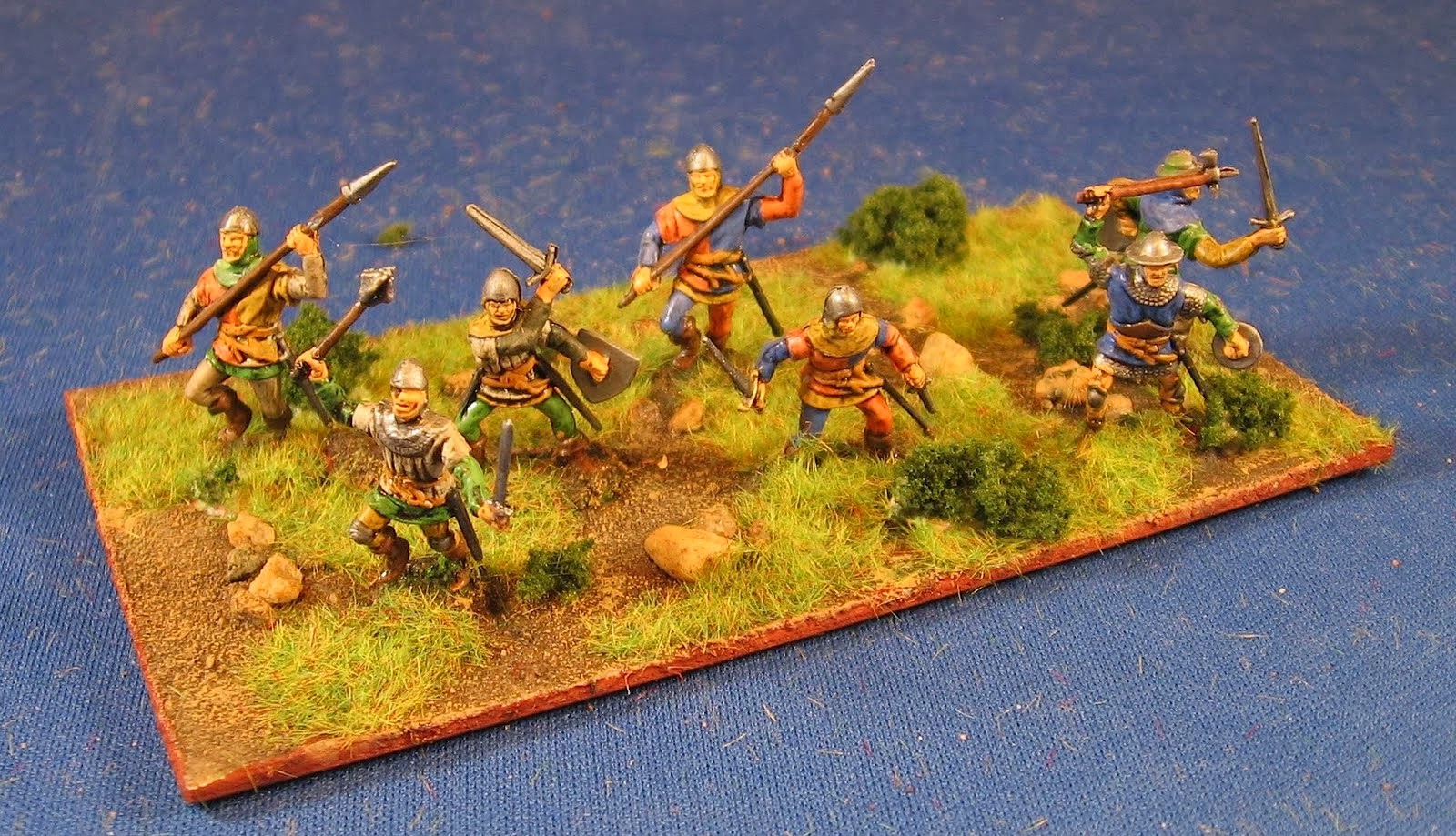 Sometimes I will do a small diorama. For example, the HoTT rules require "strongholds" so I built this stronghold for my War of 1812 British. Two troopers (who must have done something really wrong) are assigned to guard the pig pen. I call this diorama "Imperialist Pigs". 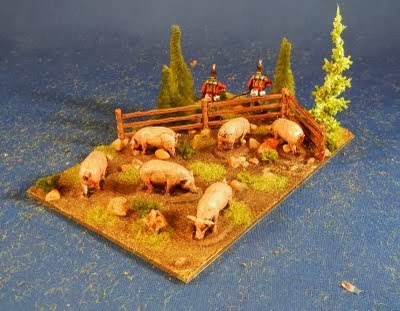 Aside from painting up some pigs and some fences and adding in a few trees, the basic technique is the same. 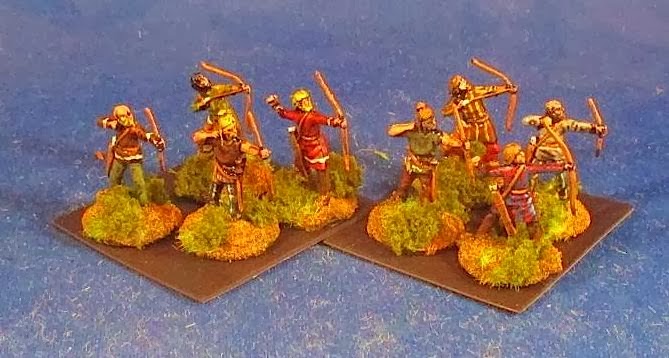 As I mentioned above, sometimes I sabot multiple individually based figures together. Here is an example using magnetic business card backers (sticky one side). I eventually stuck these on some vinyl floor tile. The vinyl floor tile was necessary to give the sabot some strength and also make it thick enough that my thick-fingered friends could grasp them.

An alternative approach to using sand and flock on a base is to print a base. These denizens of Gotham needed a more urban base so I found a stone pattern online. I printed it on stickers, cut the stick to the shape I wanted and stuck them down on the washers. Then I superglued the figure of the base. This basing approach is less robust but looks nice enough.

Its was an really helpful post,thank you. Can i get the same result using coins instead of washers??

Yes, although coins are generally not magnetic so they will not stick to magnetic bases (if that matters to you).

Thanks for the tips about basing figures. My collecting of 1/72nd scale figures has far outstripped my painting of them, so I am still a long way off from basing any of them. Nice paint jobs on the figures shown on this page. Cheers, Rob.

Thanks Rob. Yeah, when you can buy a box of 50 figures for $10, it is easy to watch the to-paint pile grow! Glad this was helpful.