I found myself with some birthday cash this month and no pressing purchases so I decided to buy some additional figures for modern gaming. I was short on cops for Gotham the last time I played so I ordered some packs from Pulp Figures.

I painted up the cops right away. These are a bit old-school (1930s) but go with the gangsters I also ordered. Foundry has some lovely 1980s cops, but I'm trying to keep my money in Canada!

The figures paint up nicely enough (given my limited skills). This group was a white base, washed on colours, details, and a dip. Looks like the grey base needs another coat. I based them on washers and used some white glue to smooth-out the join between the washer and the integral base. 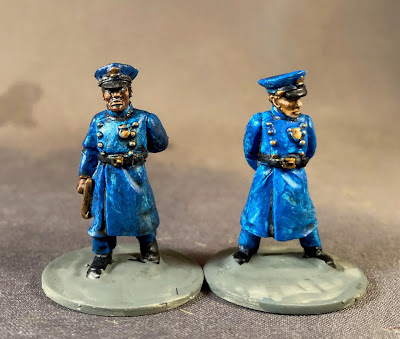 They scale reasonably well with the superhero figures.

They are a touch smaller in stature when compared to the Heroclix cops (below, centre) I have. I think in separate units, they will do just fine. I also picked up some additional clix singles that I'll get to in November. 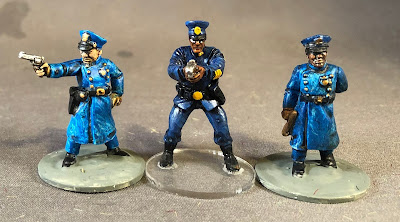 Up next: I'm moving onto some zombies for Zombtober. I also hope to run a Hallowe'en-themed game on October 15 at the club.
at 5:00 AM

Thanks. I was surprised that they had as much depth as they did in the end.