The unit lists for the first expansion of Tricorne have been posted online so I'mslowly painting up the 54mm troops I need. The expansions mostly about the French (presumably as a step towards an Indians and FIW expansion).

Rummaging around my boxes I found eight unpainted grenadiers that will work for the two French Units I need. I used the 1776 warrant (I think) which was all-white for these guys.

Fortunately these plastics had a lot of detail. The photos do a poor job of showing the wash effects--they are nicer in person. 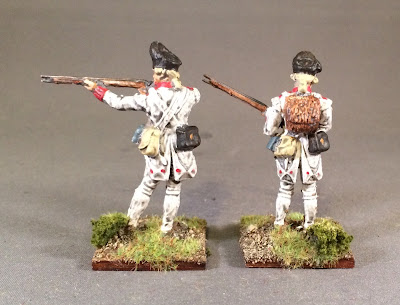 Next up are some French artillery. And then some French line. The folding up of ATKM has made it tough to find suitable 54mm AWI figures as a decent price!
at 5:00 AM

Thanks Phil; I'm pretty happy with how they turned out.