I finished off some 28mm reinforcements for my STTNG troops. These seven figures are from Last Unicorn Games and were the only minis produced for the STTNG RPG. 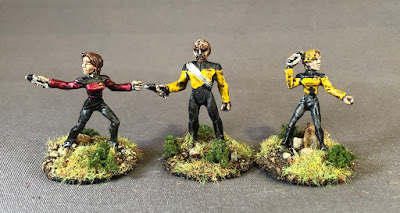 The figures are a mixed bag and were pretty expensive. There are only two female heads among the four figures. The figures in the top picture I painted as Ensign Ro Laren, Worf, and Tasha Yar. The figures below are just nameless Starfleet. The third one (science officer scratching head) I painted as Vulcan. Nice to see some non-humans.

The figures more or less scale with the STTTNG monopoly figures I have. They are a bit beefier sculpts with the usual 28mm exaggerations.  The bases on the Last Unicorn figures were wildly random.One was a full round base. Two were oblong but unstable. The rest were a mishmash of tiny shapes. Weird production choice. 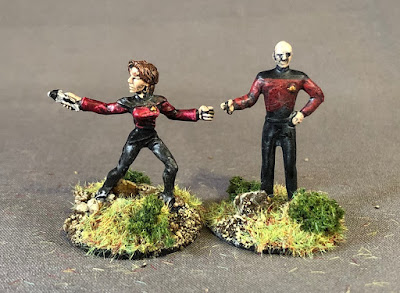 The two Worfs offer interesting contrasts. The monopoly figure on the left has the more accurate face but a terrible pose (although Worf's phaser is in the correct hand). The sculpt on the right is way better pose but the details are pretty so-so (his hair is pulled back into a braid at the back). 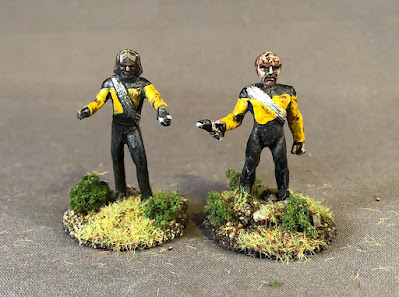 In the end, they look fine enough together to use on the table together. Apparently the Last Unicorn Figures more or less work with the Heroclix Star Trek but are thin enough to pass for youthful cadets. 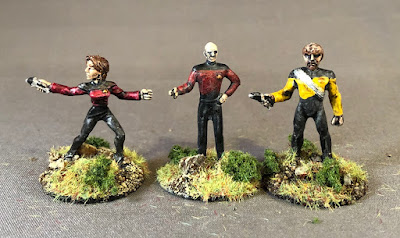