I starting to work my way through the remainders of projects to finish off figures I has set aside. First up this year are some 28mm Roman auxiliaries to supplement my Republican Romans. 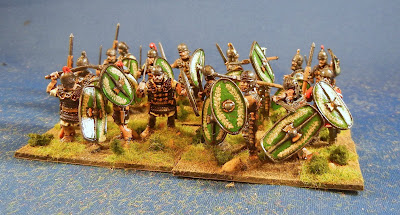 These fellows represent slightly less well equipped troops--perhaps regional troops or frontier guards. The shields are hand-painted. Not great but I have done far worse! Thanks to Tim in Saskatoon and Joe in Calgary for the inspiration. 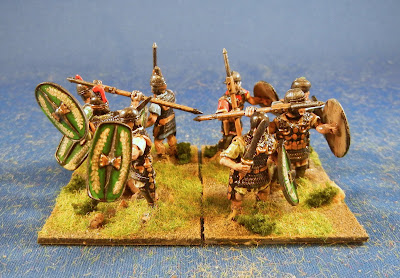 I also did up a single command base. Most of my Romans commanders are mounted as separate units on square bases for HoTT (where they can be used as a mounted hero or a lurker). I decided to just do these fellows as a straight-up command unit on a round base. 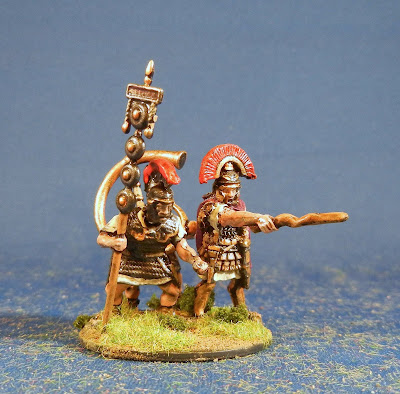 The commander is (I think) an Artizan Designs figure that I got to review back in 2008. The standard bearer and musician are Wargames Factory figures. 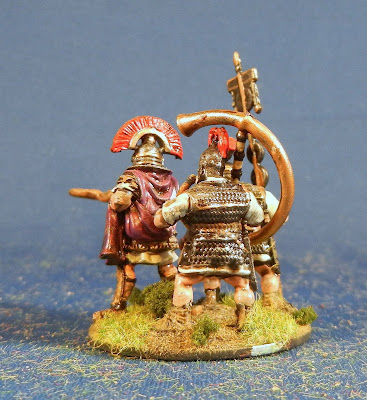 Up next: I'll be running a game of Star Trek Fleet Captains at the club tonight for four players. On the painting table, I have a bunch of Celts with the flesh and metal done as well as a bunch of Imperial Romans primered.
at 6:31 AM

Bob! Those shields look fantastic (as do the rest of the figures!)

The command figure is currently available from Gorgon, but it's very possible the figure was originally for sale from Artizan.

Tim and Allan: Thanks--they turned out way better than the effort I put into them suggested they might! I was pretty happy with the shields. Impressionistic was what I was going for. And I was hoping they would look different (rougher, less uniform) from the legionnaires.

CTF: Thanks. It was a long time ago and I think he came with crawling witch lady and perhaps another figure as a sampler. Glad to know the figure is still around.

Great work on those figures - your shields turned out beautifully. Well done!

Thanks guys--I just fiddled around some with two colours (one over top the other) and then dipped it. Glad it looks okay. I will try to be more inventive with the Celt shields in the batch I'm working on right now.